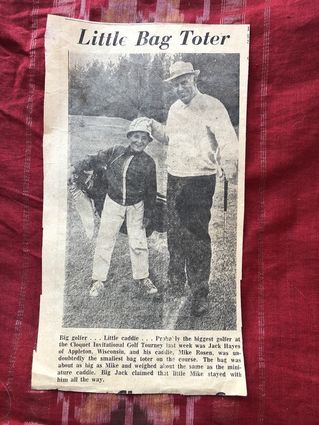 Longtime caddy Mike "Beatsie" Rosen was making news on the golf course when he was just a kid in the 1960s. This clip from the Pine Knot marvels at his tiny size. "The bag was about as big as Mike," the caption said.

There was a time when the Cloquet Country Club would advertise in the Pine Knot newspaper every July for 100 caddies to work the annual invitational golf tournament.

Back when golf carts weren't ubiquitous, nearly every player counted on a caddy and his ability to track and find balls, have tees and extra balls ready, and help read the break on putts.

Mike "Beatsie" Rosen and Gerald "Jiggs" La Breche recently talked about their experiences of caddying at the CCC. Beatsie and Jiggs are well-known around the club.

Separated by about 25 years in age, the 87-year-old Jiggs could run out his back door to the country club. Beatsie grew up a chip shot away. Both joined their brothers caddying at a young age and stuck with it - and they both revel in telling tales from those long-ago times.

Jiggs figures he was about 8 years old when he started caddying. There were three designations of caddies in the 1940s, based on ability and experience, he said. The pay rates for nine holes for an "A" caddy was 40 cents, while a "B" caddy got 30 cents, and a "C" a mere 20 cents. With time, Jiggs said he was afforded "promised jobs," or designated assignments to golfers who had standing tee times and requested the same caddy. This was a goal for all caddies. He said the golf bags seemed huge and it was a big challenge trekking up the hill to the fifth hole.

He remembered someone from the club coming to Sacred Heart school one spring and asking the nuns if they could address the students. The club needed caddies right away - this was before head greenskeeper Carl Pederson and his full crew came on - to remove twigs and branches placed on the greens to protect them from winter's harshness.

Jiggs said it was about this time when the caddies gathered by the front gate of the club and went on strike. With negotiations not too harsh, they were able to get the rates for all caddy designations raised by 5 cents per nine holes.

Beatsie began caddying at a very young age in the 1960s. Most of the Rosen entourage - his brothers and sisters and mom and dad - had connections to the golf course in some fashion.

Like Jiggs, Beatsie said the golf bags seemed huge and heavy for young caddies. Mike said he was caddying for a judge from Duluth who told the Cloquet pro, "Please get my caddie a pull cart before he gets curvature of the spine from lugging my bag."

The rates went up between Jiggs and Beatsie's caddying stints. Mike said it was about $2.50 for 18 holes but if you were lucky, maybe a tip would bring you to $4 or even $5. He added that perennial women's champ Millie Johnson would often buy him a hamburger after their Tuesday Ladies League match.

Back then, when a Mission pop cost 10 cents and a candy bar a nickel, caddies seemed flush with dough - especially during the Invitational.

Another stressful job for caddies during the tournament was fetching players' balls. At the time there wasn't a paid driving range and players would bring their own practice balls. They'd send their caddy out 100 to 200 yards, empty their bag and start shooting balls towards the caddy. With about 10-15 players shooting balls at different lengths to different caddies, Beatsie said "it was like you were one of the metal ducks at a shooting arcade just getting ready to be plucked off."

Jiggs said most kids in Blue Town - the nickname then for the west side of Cloquet from the country club to Pinehurst Park - had a little golf course in their backyard with tomato can cups. They played with whatever clubs they could scrape up. 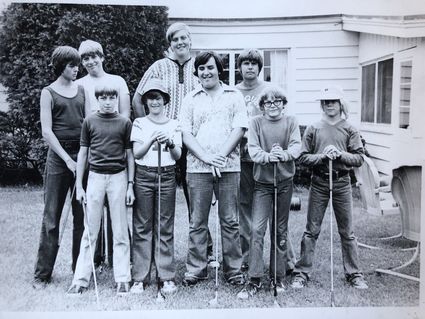 Longtime caddy Mike "Beatsie" Rosen stands front and center in a picture he says is from the late 1960s or early 1970s at the Cloquet Country Club. This caddy team could have been inspiration of the characters in the film "Caddyshack." Photo courtesy Rosen family

Caddies were allowed to play at the club on Monday mornings. Jiggs said caddies borrowed clubs from players they regularly caddied for. Ladies' clubs worked the best for him when he was young. Caddies were expected to find their own balls to play with. His favorite was the Spalding Bomber.

Both of these one-name phenoms eventually became successful school teachers. This freed up some summertime for golf. Both became successful and prominent golfers. In the late 1950s, Jiggs became the first Cloquet golfer to win the Invitational. He bested Leo Spooner, who won several times at the tournament.

Beatsie, who still works at the club as a cook as well as in maintenance, is a former Cloquet Country Club champion. Both have won the Big Lake Shortstop Golf tourney.

It was in the 1990s when carts supplanted caddies. It was a fun way for many years for westside kids to make some money.

This year's 88th Invitational is scheduled for July 12-14.