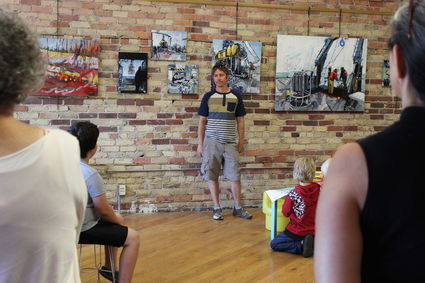 Adam Swanson spoke with people at the art opening at the Pine Knot News gallery last week. The show will continue until September 2019 and people can stop by anytime the office is open.

For the next two months, the Pine Knot Gallery is showing Adam Swanson's paintings. When I first saw his work, I was struck by his blends of color, as in his "You Are the Water," depicting two working men on an outdoor industrial job site, full of blacks and blue-grays punctuated by red jackets and yellow pants. And his "Nowhere Else to Go," a painting of a Boundary Waters-like channel, as if you are in a canoe and approaching a narrowing between orange and red cliffs topped by towering pines.

Swanson, an art major at UMD, faced post-graduate challenges common for art grads. He worked as a waiter and substitute teacher, painting in the evenings. One day in a coffee shop, he researched cool jobs on websites and landed one in Antarctica, doing carpentry and maintaining small Zodiac boats for researchers. In the afterhours, he painted. He ran a printmaking workshop and art show for people overwintering. In 2009, he returned to Minnesota and decided he wished to make artwork fulltime.

"I worked my way into my style," he reflected in a recent interview. "My paintings are somewhat representational but not photo-realistic."

His style has changed a lot in 10 years. He discovered that he likes to work with watery paint, sometimes with the canvas on the ground, dripping paint onto it.

Adam's work, in a more formal statement of it, addresses the future, fragility of the human presence, perseverance of nature and underlying threads of danger woven through societies. "There is a deep relationship between art and science," he said. "The more we learn about our surroundings, where we came from and who we are, the more likely we will thrive in a universe of endless possibilities."

Swanson is primarily a painter, but with deep interests in photography and film.

"I paint largely from photographs and videos I have taken," he said. "I use the texture and interplay between colors to create music for our visual sense."

This summer, he is painting three murals; it's "super fun but very demanding!" he said.

Going forward, Swanson hopes to experiment. He's done some science paintings and would like to do more. "It's actually hard to find three days in a row to do a painting that I'll never show," he said

Swanson lives in a log home on the Ditchbank Road, paints full-time, is married and a father of two. He built his studio himself, with friends. "It's like a glorified two-car garage, insulated, in-floor heat - a dedicated studio space with 10-foot ceilings."

Pine Knot readers are invited to stop by the Pine Knot News (and The Knot Gallery) at 122 Avenue C in Cloquet anytime the office is open to check out Swanson's show. Hours are 9 a.m. to 5 p.m. Monday through Wednesday, 11 a.m. to 4 p.m. Thursdays and 9 a.m. to 1 p.m. on Fridays. You also can view his work at http://www.adamswanson.com. 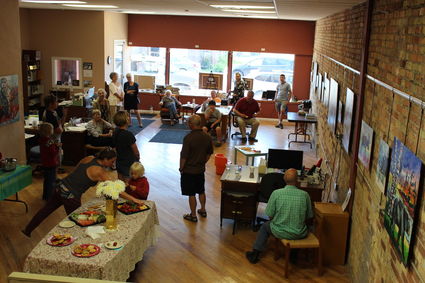 People enjoyed food and drink and meeting with the artist during the July 11 reception.

Ann Markusen is an economist and professor emerita at the University of Minnesota. A Pine Knot board member, she lives in Red Clover Township north of Cromwell with her husband, Rod Walli.