Cloquet bows out of Legion playoffs 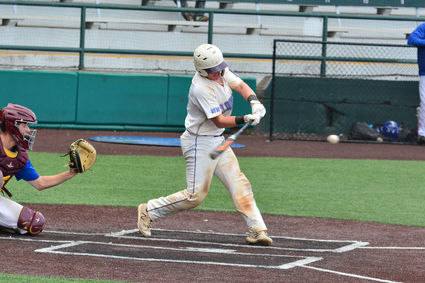 Cloquet Legion player Nick Baker takes a swing at the ball, resulting in a big hit during a Cloquet Legion game against West Duluth earlier this summer.

The Cloquet American Legion baseball team went 1-2 in the District 10 tournament last week, after opening with a 7-2 victory over Hibbing.

Cloquet was the host site this year, with Wade Stadium in Duluth as the secondary site for a District 10 tournament that included Cloquet, Hibbing, West Duluth, Thunder Bay, Hermantown, Grand Rapids, Nisswa, and Duluth Lakeview.

Tim Pokornowski pitched a complete game 5-hitter for the Cloquet win in the opening round of the tournament Wednesday, July 24. Pokornowski struck out six and walked three. Both runs scored by Hibbing were unearned.