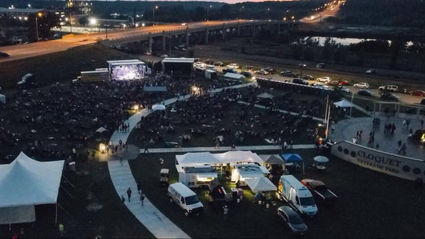 Not bad for a festival borne out of a prayer group with no event organizing chops.

Lee Harris was praying and got a “prompt” to start working on developing a festival. A few months later, the first Wood City Music Festival debuted. About 1,700 people came out to see seven or eight bands, Harris said.

Things have only gotten bigger. The music festival director figures the free Christian music festival doubled in size the first 2-3 years, and peaked in 2017 with between 8,000 and 9,000 people before dipping back to 7,500 in last summer’s hot weather. With partly sunny weather and temperatures in the 70s predicted for this weekend, Harris expects a good turnout this weekend.

Thesixth annual event runs from 10 a.m. to 10 p.m. Saturday, and features 15 national and local Christian bands on two stages, including headliner headliner Kutless — a five-member band from Portland — and Manic Drive, a Canadian pop, funk, and rap band whose most recent album was nominated for a 2019 Contemporary Christian/Gospel Album of the Year.

A Kingdom Builders Ministries worship team will kick off the festival at 10 a.m. Radio hosts from Refuge Radio 89.5 will emcee throughout the day and air live interviews with some of the bands at the festival. A number of local bands are in the lineup, including Holy Hootenanners and the Plow Boys.

It’s not just about the music, though, Harris said, or even religion. It’s also about community, and family, and fun.

“The main thing is this is a family-friendly day,” Harris said. “You don’t have to know anything about God or church or the bands to come and have a blast. And the children’s area is amazing — it’s packed with fun things to do.”

There will be free parking in designated public parking lots and on-street parking. Festival-goers need to bring their own chairs and blankets. Although great food at reasonable prices and beverages will be available for purchase, people also are welcome to bring their own snacks and non-alcoholic beverages.

Even the bands want in on the action in Cloquet. Harris said some bands waited two years to play here, and he didn’t have to deal with any agents for the larger bands: they reached out and asked to play.

Still, it’s a big task to organize a day filled with music, games, food and fellowship. Harris said he thinks that’s the real reason he got that prompt years ago.

“I think the purpose is giving ‘the church’ something that we have to work together to do,” he said. “Probably 95 percent of of local churches have the same philosophy, but we compete over the 5 percent that’s different.”

The festival is supported by many local churches, with free admission made possible by donations.

Harris figures it takes about 400 volunteers and a lot of love to keep things running smoothly.

“That love, that will bring hope and peace to people who need it,” he said. “And that’s what the church is meant to be in the first place.”

There will be an outdoor community church service at 11 a.m. Sunday at Veterans Park. All are welcome and can bring their own chairs and blankets.

For more information on the festival, the bands, or volunteering, visit the Wood City Music Festival Facebook page, its website at woodcitymusicfest.com or email [email protected]