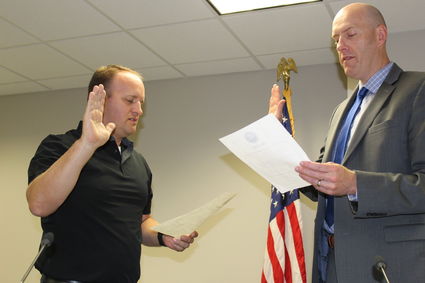 New Ward 3 Cloquet City Councilor Chris Swanson is sworn in at the start of thr Aug. 7 Cloquet City Council meeting by city administrator Aaron Reeves. Swanson was selected by the council last month after an interview process with four candidates to serve as interim city councilor until an election is held in November (or February in case of a primary) to replace former Ward 3 Councilor Dakota Koski, who moved outside of Ward 3 and could no longer serve as its councilor.

It was quite a first meeting for interim Ward 3 Cloquet city councilor Chris Swanson last Wednesday. The agenda appeared simple and uncontroversial.

Then Ward 2 councilor Sheila Lamb made a motion to deny a routine donation from Enbridge Energy to the National Night Out celebration put on by Cloquet police, asserting that if the company's Line 3 pipeline goes through, sex trafficking will increase in Cloquet and other Carlton County communities.

"A $1,000 donation is not worth putting a single child at risk," said Lamb, stating that there is a direct link between an influx of temporary workers (such as pipeline construction workers) and a potential for an increase in sex trafficking.

"We adjoin Fond du Lac Reservation," said Lamb, who works with youth at Lifehouse in Duluth. "We are already having an issue of Native American girls within our community being trafficked. And this hurts my heart as a mom and a grandma, and as an individual who works with trafficked and at-risk youth."

Lamb asked the council to join her to say "no" to any industry, of any type that has a link to sex trafficking and to send a message to Enbridge that "we will not take your money and put our babies at risk at any level."

In discussions following Lamb's motion but before the vote, Swanson verified the amount, and Ward 4 councilor Kerry Kolodge wanted to know if the money had been received and deposited - it had not.

In a statement sent to media a day after the meeting, Enbridge spokesperson Juli Kellner said the company "absolutly rejects" the allegation that human trafficking will increase in Minnesota as a result of the Line 3 project and stressed that all Enbridge employees and contractors are held to high standards and must act in accordance with the company's business conduct policies and within the law.

"At the same time, Enbridge recognizes that human trafficking is a real and important problem happening right here in Minnesota," she wrote. "As members of the community, we stand strongly against this exploitation."

Lamb also questioned whether Enbridge was, in fact, a good corporate neighbor. She expressed concern about the ongoing lawsuits against the state by Enbridge and other utility companies - lawsuits that, if successful, will require the county as well as affected school districts, cities and townships to repay tax money already collected and spent.

According to former county auditor Paul Gassert, if Enbridge is successful in its lawsuit, Carlton County and its townships and school districts could be liable for more than $1 million.

Kellner clarified that the issue is a change in the State of Minnesota Department of Revenue's valuation process.

"Enbridge recognizes counties are caught in the middle of this state-imposed tax dispute, and remains focused on trying to find an equitable solution," Kellner said in the release. "We know that the recent ruling in our property tax appeal represents a potential burden to counties and their budgets and we have consistently told them that we are committed to work with each county if needed at the appropriate time." 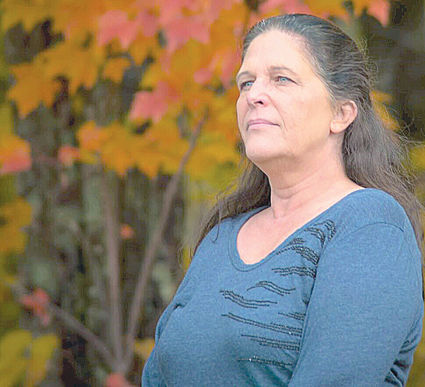 Kellner stressed that Enbridge has been a good neighbor in Minnesota more than 70 years, and pointed out the company's agreement with the Fond du Lac Band of Lake Superior Chippewa allowing Line 3 to cross the reservation. She noted that not only has the company donated nearly $4 million since 2014, she pointed out that its employees live and work and raise their children here.

"We can do fundraisers, we can get creative," Lamb said. "But we have a responsibility to ensure the lives and the safety of our children, our women - this includes our young men."

Before the meeting ended, acting police chief Carey Ferrell stepped forward to ask the council to approve all of the other National Night Out donations, as they had not done that after voting on the one Enbridge donation.

"We couldn't do that event last night without donations," Ferrell said.