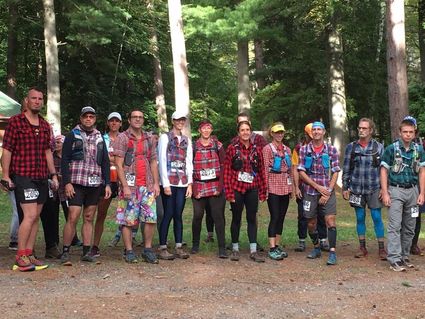 Racers in the Lost Forester race wait for the countdown to begin the race Sept. 2 at and around Cloquet's Pine Valley. All have on "motley" flannel to receive a five-minute time deduction.

Cloquet's own wacky race, the Lost Forester Adventure Run, had a record 23 racers this year and 22 finishers (because one had to leave to get to a soccer game). Only five racers, however, officially finished within the required 3-hour time limit, according to organizer and lost forester himself, Tim Krohn.

The Lost Forester is a race in and around Pine Valley recreation area and the Otter Creek Area on the Fond du Lac Reservation: and runners travel across the trails - and through the woods connecting them - instead of on them. Krohn said the race is "eightish miles."

"It depends on the way you choose from the Forester to the finish," Krohn said. "So it can be eight miles, or 11, or somewhere in between."

"There's no map to get to the Lost Forester," said Krohn, explaining that the racers followed orange ribbons to reach the Forester and get the map. They were also supposed to collect plot or data cards at various locations, but a bear got into one of the plot bags and destroyed all the cards in it before the race, Krohn said.

"So we just skipped that part," said the cheerful Krohn.

Racers got 5 minutes time shaved off for wearing flannel, as usual. Ten men and 11 women ran the race, plus the one who didn't finish and one who signed up but didn't run.

Krohn pointed out that Anderson actually finished a longer race in less time this year. 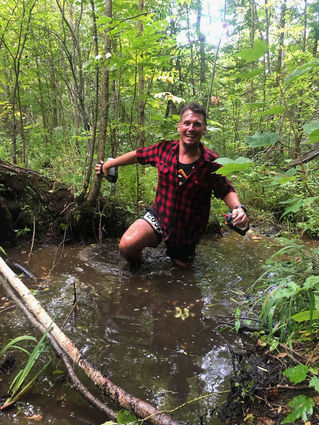 Tim Miller of Cambridge enjoys a wee bit of mud and water in one of the multiple swamps in search of the Lost Forester.

"He was getting pushed from behind, so he ended up finishing 15 minutes faster even though the course was half a mile longer," Krohn said. "They really cooked."

Speaking of cooking, all the racers enjoyed pancakes after the Labor Day races, which also included 11K and 5.5K trail races. A total of 37 runners also participated in the 5.5K race that morning and 11 in the 11K race.

Krohn said they raised approximately $2,300 for the Blue House Orphanage in Uganda.