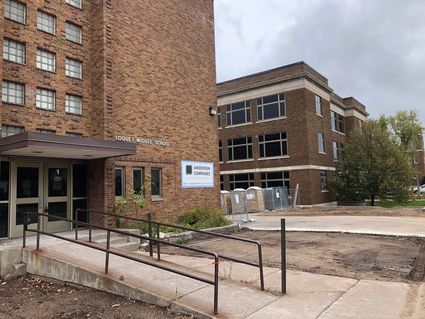 The "new" Carlton Lofts apartments will offer truly "old school living" as they are located in the former Cloquet middle school and even older high school building. The apartments are still under construction.

The Dusty Boots Tour of Cloquet's newest affordable apartments was as much a walk down memory lane as it was an apartment showing.

"I'm so glad they're using this building, not tearing it down, and that they're leaving things like the blackboards and cupboards," said Carlie, admiring the large, original blackboard that takes up more than half a wall in the living room of the model two-bedroom apartment. Another smaller blackboard sits inside a pantry off the open kitchen area.

"This was my room," said retired teacher Linda Jankowski. She pointed out where her desk used to sit in what is now the living room area of the apartment.

Jankowski, a science and language arts teacher, said she taught in the middle school building two different times over her 30 years with the school district.

The apartment tours drew a healthy crowd Thursday, Sept. 26 as people took the elevator or walked the stairs up to the third-floor apartments. While many, like Jankowski and the Nynases, were there out of curiosity, others were looking for a better place to live.

When the construction is finished, the two wings of the former middle school - and Cloquet High School before that - will hold 57 apartments, with nine one-bedroom, 33 two-bedroom and 15 three-bedroom apartments. Forty-five of the units are classified as "affordable" and tenants must meet certain income guidelines to live there, while 12 will be market-rate.

Amy Borrell, speaking for Roers Companies, which owns and is developing the building, said they expect to have the 35 apartments in the west wing of the building complete and ready for occupancy in December. The 22 units in the east wing - which was completed in 1921, after the 1918 fire burned down what had been a brand-new high school - will be finished "after the first of the year." Rents are projected to range from $700 to $1,075.

The fact that the building was deemed historic has been both a blessing and a curse. The designation meant money for the development, but the restrictions placed on historic renovations have also slowed down and, in some cases, altered plans for the project. The Minnesota State Historic Preservation Office, along with the National Park Service, required the developer keep the pool and gym structures for historical purposes.

As pitched to the city of Cloquet in the permitting process, the pool building was going to be torn down to make space for a parking lot. Now the pool and former cafeteria spaces will be converted to 36 structured parking stalls. In addition, the building will have 78 surface parking stalls, meeting the city's requirement for a 2:1 parking ratio.

Borrell said the entire building was deemed historic, so workers had to do their best to preserve that historic character, including the locker-lined hallways, doors, chalkboards, wood and marble floors, and more. In addition to leaving the gymnasium, Roers had already planned to keep the theater, as it was, and previously said they could make it available for community groups.

"With every historical conversion project there are challenges," Borrell said. "Once we finally got started after we got historical sign-off, our general contractor has done a good job keeping the project on schedule. The units present some very unique and cool layouts. Wonderful high ceilings and big windows. The mezzanine units where the old library used to be will be very cool." 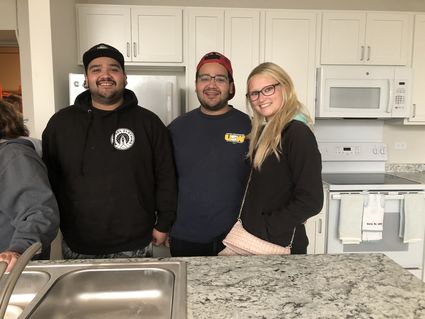 Mario and James Lozoya and Lexee Borgeson liked what they saw at the Carlton Lofts, but also enjoyed reminiscing about their middle school days in the building and trying to figure out whose classroom had occupied that space when they were there. All three 2014 Cloquet High School grads are apartment hunting right now.

Toni Johnson, property manager for Common Bond, which will manage the property, graduated from Cloquet High School in 1995, when the graduation was still held in the middle school gym, she said.

She was answering questions and handing out applications to prospective tenants, like Linda Koehler, who said she and her husband live in a smaller, dark apartment in Sahlman Courts where they pay more than half of their income on rent. Koehler is on disability, her husband is a retired veteran. They'd like to live somewhere nicer, that's more open and maybe will leave them with more money to live on.

"This is more affordable, at least $100 less than what we're paying now and every little bit helps," she said. "And I have a friend who lives in a former school in Duluth. It's so neat."