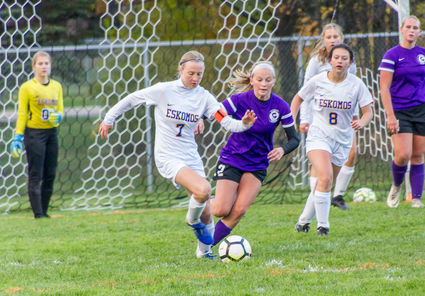 Esko's Tori Vosburg and Cloquet's Brenna Mattson race after the ball in front of Esko's net last week. The Lumberjacks got a 2-0 win.

"Our ladies played great team defense again, only letting in one goal in the first half," said Esko co-coach Alissa Anderson. "Our sophomore goalie, Orie Randall, played an excellent game getting 11 saves."

The Lumberjacks lone first-half goal was scored by Jillian McCullough with an assist by Alexa Snesrud in the 26th minute.

"Jillian came on and scored with what may have been her first touch of the ball," coach Dustin Randall. "She had a great hard shot over the keeper."

The Lumberjacks controlled play throughout. That is something Esko would like to see change in the playoffs.

"We need to increase our quality scoring chances in the final third of the field," Anderson said. "We will be working hard on that this week in practice as we head into playoffs on Thursday."

In the second half, the area's leading scorer Kiana Bender scored in the 61st minute with the assist going to Snesrud again. 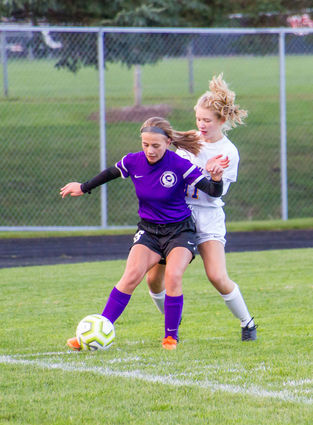 "Kiana is doing well and is really important for us - a lot of our attack goes through her or is created from the attention she gets," Randall said. "As far as Snesrud, she is an amazing athlete and plays up front for us. She works really hard, runs really fast, and has a heavy shot from both feet. She will cause stress in our opponents for years to come as she is only a ninth-grader."

As well as the Eskomos played on defense, the Lumberjacks were even more effective - allowing only four shots on Gracie Meagher, who finished with yet another shutout.

"Our defending is the strength of our team," Randall said. "We have really given our opponents very few chances to score. We also have had a few injuries back there and players are stepping up and filling roles without missing a beat."

Cloquet improved its record to 14-2 while the Eskomos fell to 6-9 for the regular season.