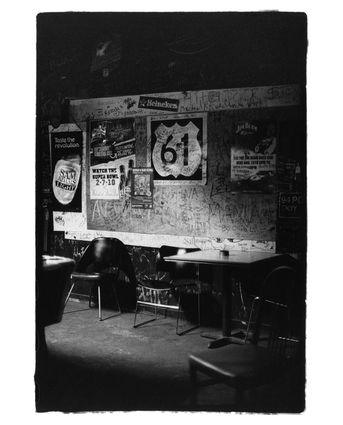 A scene from Mississippi from Jessica Lange's latest book.

Before the dawn of the Interstate Highway System, the federal government invested in paved roads that traversed the continental United States, coast to coast, north to south. Some of these roads - such as Route 66 - have received acclaim through stories, songs, and televised series. Others faded into the background as interstate highways bypassed the small towns and farms to move people and goods with greater speed and efficiency.

Last October, my husband and I were returning from a road trip to Texas and wanted to pass through Tennessee. Exhausted by the caravans of semi-trailer trucks traveling at 70-plus mph on the freeways, we sought an alternate route.

Using an old-fashioned road atlas, we found U.S. Highway 61 in Louisiana heading due north through Mississippi and on to Tennessee. We wondered if this was the same Highway 61 that winds its way through Carlton County and on up the North Shore to Canada. A closer examination of the atlas provided our answer. It was.

Highway 61 in Louisiana and Mississippi travels through small towns and past farm fields, mostly cotton. The drive provided a respite from the heavy truck traffic, a slower pace to absorb pieces of the American landscape, see the cotton harvest in action, beef cattle with white egrets perched on their backs, small towns now consisting of churches and dollar-type discount stores.

Memories of those bucolic miles returned when I read a recent interview with Cloquet native Jessica Lange in Time magazine. Her third book of photography, "Highway 61," has been released. She describes how she chose to focus on the people, sights, and places all along Highway 61, from New Orleans to Minnesota. I found myself nodding as she spoke of the feeling of loneliness in seeing deserted towns and rundown farms. She said, "I see it in the empty storefronts and boarded up buildings and the abandoned farms and the barns that have collapsed." We share Lange's impressions when we recall our passage along 61.

With my curiosity piqued about Lange's book, I stopped in at the Cloquet Library to learn if they just might have it. The ever-helpful librarian checked the computer, smiled, sauntered over to the new releases bookshelf, and pulled out the coffee table-sized book for me. Gazing at the black and white photos carries the onlooker on a journey through the heart of America - some of which is familiar to us. I found myself drawn to retrace Lange's steps several times before returning the book to the library. She says in her comments at the end of the book that for her, photography is an emotional experience and truly proves her point with this work of art.

It feels as if I have come full circle, from last October's revelation about the whole length of Highway 61, to learning of Lange's book, to finding it at her hometown library. Those little white Highway 61 signs now trigger new images as I drive on the local section of the now "more famous" road.

Francy Chammings is a retired English teacher and psychologist who lives in Carlton County.