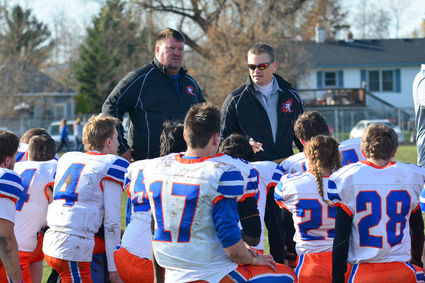 Coaches Jason Crane and Jeremy Zywicki talk to the Raptors team at halftime during Saturday afternoon's playoff matchup against the Deer River Warriors. The team was down 8-0 at this point.

All good things come to an end. The inaugural and undefeated Carlton-Wrenshall Raptors football season came to a close with a road loss at top-seed Deer River by a score of 22-0 in the second round of the Section 7A football tournament.

The Raptors had a chance to gain the early lead, but a 20-yard field goal attempt missed - keeping the game scoreless into the second quarter.

The only score of the first half came after a botched snap for the Raptors in the shotgun, allowing Deer River to recover the football at the 15-yard line. With less than a minute and half to play in the first half, the Warriors were able to grab the lead on a 2-yard touchdown run by Trevor Michienzi and the two-point conversion run by Blake Fox, giving Deer River an 8-0 lead at half.

"At half we told the kids to keep working hard, and that defensively they were playing great," said Raptors co-head coach Jeremy Zywicki. "Offensively we were trying to make adjustments, but it was more so that we had to try and eliminate the mistakes and turnovers."

The Raptors had a 9-0 record going into the game. They were undefeated in nine-man play and won the first playoff game in 11-man.

They showed they belonged in the larger school setting - at least defensively - by keeping things to a one-score game entering the fourth quarter.

"Defensively we played very well," Zywicki said. "Offensively we shot ourselves in the foot several times. All of Deer River's touchdowns came off of offensive turnovers. You are not going to win football games turning the ball over seven times, which is what we did."

Right at the start of the fourth quarter, the Warriors added a second score when Fox hit tight end Logan David on a 21-yard touchdown strike, making it 14-0 after the two-point conversion run was stuffed.

Down by two scores, the Raptors tried to get back in the game, but with a minute left in regulation Michienzi ended any thoughts of a comeback by bulling his way into the end zone on a 7-yard run. Talance Fairbanks caught the two-point conversion pass for the final score of 22-0.

"Overall, I couldn't be more proud of our football team. This was the inaugural season in which the Carlton and Wrenshall football programs came together as one team," Zywicki said. "During this year we went 8-0 during the regular season, we won the district championship - something that has eluded both schools for 40 years. We had to make the switch from nine-man to 11-man in a matter of less than a week (and) we played our first opponent and won."

Perhaps even more importantly, the fledgling program proved that the two schools could come together to form a powerful alliance. 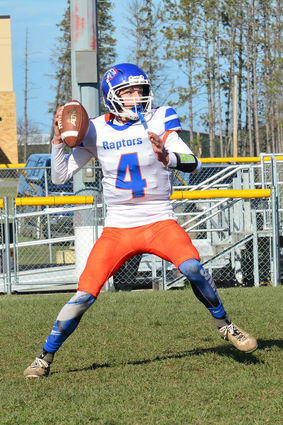 "New relationships were formed among student athletes, as well as coaches," Zywicki said. "These kids have not only brought these programs together, they've shown our communities that this can work, and how successful it can be. I thought this season was a tremendous success, and I'm proud to have been a part of it. There was a lot of work that went into it, but anything that is worthwhile takes a little blood, sweat, and tears.

"I hope that our two school districts can bring more of our programs together in the future. I will do everything in my power to try and make that happen because the kids in both of these communities deserve it."

Find more photos from Saturday with this story at pineknotnews.com.