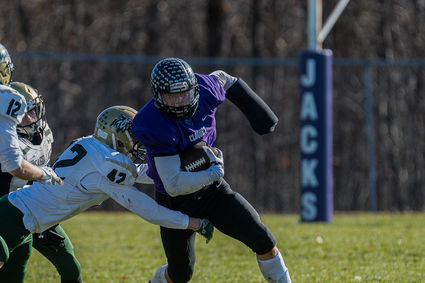 Cloquet's Markus Pokornowski was a marked man as he tries to round the corner and is brought down by Mason Molde of Chisago Lakes during first-half action. He would later get hurt, along with three other running backs, which doomed the team.

If football is a war of attrition, the Cloquet football team got the full scope of things in their 14-0 home playoff loss to Chisago Lakes Saturday in Cloquet. In a matter of minutes, the Lumberjacks lost four of their top running backs to injury and any hopes of a comeback against the Wildcats faded into the autumn skies.

The first half was mostly a defensive battle between the two teams until the Wildcats finally broke through with a 36-yard touchdown pass from quarterback Nick Wasco to Zach Mueller with just 55 seconds remaining until halftime. Chisago Lakes was unable to convert on thei...