Korby: Old 'Y' was a mecca for recreation in city activities 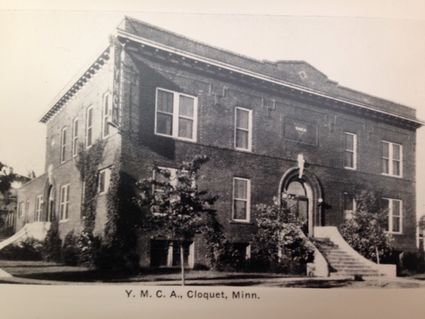 It's difficult to find records on Cloquet's YMCA, later known as the Cloquet Civic Center. It makes sense that it was built just after the 1918 fire as accounts of the fire tell about the YMCA catching fire.

Although it's been close to 40 years since the lights went out for good on the Cloquet Civic Center, many Cloquet residents still have fond memories of the iconic downtown building. Located on Cloquet Avenue between Fifth and Sixth streets - the present home of the Cloquet Area Fire District's Station 1 - the civic center was a destination for generations of area residents.

Also known as the "Y" (originally, it was affiliated with the YMCA), the civic center had a gymnasium for basketball, volleyball, floor hockey and other hardwood games, ping pong and pool tables, a handball/paddleball court, arcade games, a three-lane bowling alley, locker rooms and showers, boxing/wrestling speed bag and mats, card tables, a TV viewing area, and a telephone (on a wall, imagine that). It also had, for a period of time, an adjacent outdoor tennis court that later became a parking lot. What's not to love about all those diverse recreation offerings under one roof?

For decades, the civic center staff included Kate and Harold Vestin, Clare Hendrickson, Dick Miller, Lil Eilers, and Moose Pastika. They were city and school district employees dedicated to supervising the many kids who came there. Although the civic center's schedule basically coincided with the local school year, being open from September to June, the upstairs of the building was open year-round, as it housed the administrative offices for the city of Cloquet.

"I grew up in Scanlon but I could walk down to the Civic Center after school and it didn't require a ride," Benko said. He remembered that Hendrickson coached the youth basketball program, noting that the coach had many unusual, yet effective, basketball drills.

"You had to dribble using both hands equally with your head up," he said. "It was fun, and tremendous fundamentals." Benko reported that during the week it was mostly Cloquet kids in the gym, but on Saturdays the rest of Carlton County showed up.

Jack Hagen, also of Cloquet, is the same age as Benko. The pair have similar memories of the basketball fundamentals taught and coached by Hendrickson.

"Looking back, what impressed me was there was no misbehaving," Hagen said. "If you screwed around, Clare sat you down on the sideline bench and you wouldn't participate in the drills for a period of time. Clare ran a tight ship."

He also remembers playing against girls selected by Kate Vestin, and under Iowa girls basketball rules: three players on defense and three on offense. "It was bizarre," mused Jack, "but entertaining." Like many others, Hagen (who coached boys basketball at Cloquet for years) is convinced that Clare and the Civic Center's youth basketball programs were a big reason for the success of Cloquet High School basketball teams during this era.

"It wasn't an automatic pin setting machine," he said. "It had a rack that you put the pins in, and then lowered it onto the lane. Also, you had to be quick: there weren't automatic ball returns, you had to push the balls back to the bowler." Winterquist said he earned a nickel or dime for each game. That was enough for a soda, which was great.

Certainly one of the most renowned Civic Center members was Debbie Hunter.

Hunter was a star for the Cloquet High School girls basketball team in the late 1970s, and a regular at the 'Y' in the fall prior to basketball season.

Hunter could hold her own and then some, playing evening pickup games with high school boys and adult men.

"I'd go to high school volleyball practice after school, go home and eat supper, and then come back to the Civic Center to shoot hoops and participate in games," said Hunter in a recent interview from her Texas home. "I must have liked it a lot, for as many times I walked back and forth to there from home."

As far as playing mostly with boys and men, Hunter said her dad came with her a few times at first.

"After a while, he just said the Civic Center is everybody's place, and have fun," she said.

Hunter went on to have a terrific career with the Minnesota Gophers. Her number is retired and a banner hangs in Williams Arena in her honor, a rarity reserved for the school's best players.

Thursday evenings were devoted to a men's basketball league for as far back as the records go. Teams, four- to six players strong, came from Cloquet, Carlton, Esko, Cromwell and Moose Lake. There was a score clock that definitely wasn't digital: you could hear the numbers changing and the timer had a spinning dial that sometimes made it hard to differentiate if there were five seconds or 65 seconds left in a period. Since it was a smaller gym, it led to a very physical league not meant for the squeamish. It was also a referee's nightmare.

Over the years, some of the league's best teams played in state and regional tournaments.

When I went to the Carlton County Historical Society to do my research, I found some historic pictures, but not a record of when the Civic Center was built. However, it appears in photographs shortly after the 1918 Fires.

By the time the center closed in 1980, the gymnasium roof leaked, the locker room showers hardly worked, and there were other costly maintenance issues. Logically, it likely would have cost too much to refurbish.

After the Civic Center closed, activities moved to the Garfield School - where the gym was smaller and there just wasn't room for all the activities. The men's basketball league ended in the 1990s and, eventually, Garfield was closed as well. 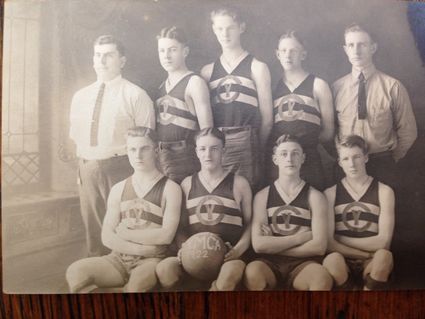 The YMCA basketball team from 1922.

What filled the void after the Cloquet Civic Center closure? Well, lots. Over the last few decades, Cloquet has built two covered hockey arenas, large gymnasiums at two schools and a new pool, expanded a golf course, along with many playgrounds, new tennis courts, outstanding outdoor basketball courts and an outdoor pool, soccer fields, bike/running and walking trails, ski and senior centers, the new library expansion ... and the list goes on.

Yes, it might be impossible to replace some of the memories and cultural and generational interaction provided by the Civic Center, but interests and demands change over time, and recreational and educational opportunities abound in our community and region. Take advantage of them and make your own memories.