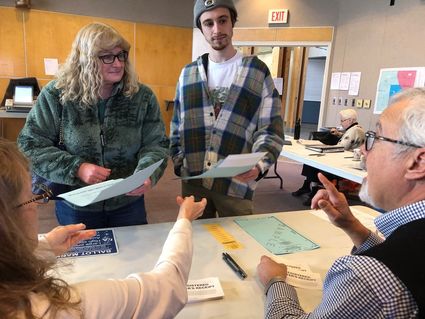 Patty and Josh Ludwig get instructions from election judge John Cavanaugh before voting in Tuesday's primary election for Ward 3 City Council. The mother and son said they feel it's important to vote in local elections.

The Ward 3 voters in Cloquet (about 14 percent of them) have spoken. Following Tuesday's primary election, Chris Swanson and Uriah Wilkinson will advance to the special election in February for the Ward 3 Cloquet City Council seat. Ray Schow will not.

Out of a possible 1,312 registered voters in Ward 3, Swanson received the most votes with 124. Wilkinson garnered 54 votes and Schow got seven. One ballot didn't count because the person voted for two candidates.

Election judge John Cavanaugh said the turnout was actually better than expected for a primary election with only one local race, no...