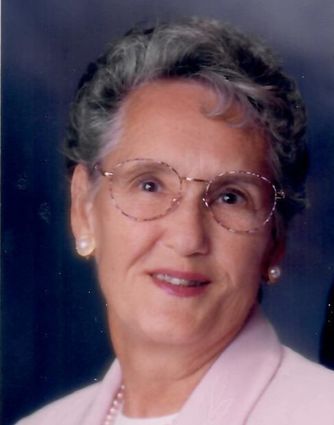 Fran, known as “Dolly” by many in her family, was born in Cloquet, Minnesota on Nov. 11, 1928, the first child of Frank and Sadie Gurneau. She was a proud Elder of the Fond du Lac Band of Lake Superior Chippewa. Fran married Ken Ziebarth, a longtime high school teacher and counselor, during a snowstorm on Nov. 20, 1948. Their marriage welcomed six children and lasted until his death in July 2017. Fran was a resident of Minnesota for 89 years; she and Ken made their home in Cloquet, St. Paul, Houston and Fulda before settling in Pipestone in 1968. She will be remembered for her smile, soft voice, joyful eyes and big heart.

Fran’s greatest joy was tending to her home and family. She took great pride in being a homemaker, sometimes literally, as she mixed the cement foundation for their home in Fulda. Ken often referred to Fran as an Energizer Bunny because she sat down only to watch sports or hold a baby. Her timing was impeccable in bolstering children’s spirits with simple positive mantras, such as “You’re such a good boy,” or “You are the best big sister,” when they needed to hear it most. Fran did even the smallest tasks with intention, precision, and calmness, from meticulously folding laundry to preparing holiday meals for dozens. Her home was always ready to welcome visitors with a pot of hot coffee and everyone’s favorite foods (German chocolate cake, assorted pies, tater tot hotdish, Old Dutch potato chips, and Twin Bings). She helped Ken harvest the produce from their five-acre property in Pipestone, making delicious raspberry jam, applesauce, and apple pie. Never one to miss an opportunity to go shopping, Fran enjoyed buying birthday and Christmas gifts for her children and 37 grandchildren and great-grandchildren. Her grandchildren remember Christmas gatherings with cookies filling the kitchen table and mountains of gifts filling the living room.

Fran owned and operated F & M Apparel in Fulda and managed Plainsman Associates Insurance Company, supporting Ken’s role as an insurance adjuster and salesman. She maintained an interest in fashion throughout her life and was always keen on looking her very best, ever anticipating visits to the salon. Her hobbies included golf, bridge, cribbage (where she was often tasked with keeping an eye on Ken’s inventive scoring techniques) and following the Twins and Vikings. Fran loved traveling to visit family, joining them on vacations, and cheering for her children and grandchildren at their many sporting events and activities. She was a wonderful seamstress and made many beautiful ceremonial outfits for her family to wear to powwows held on the reservation in Fond du Lac.

After being a caretaker for so long, Fran switched roles the last two years of her life when she moved to Cordova, Tennessee where she was cared for by her son and daughter-in-law, David and Michelle, and their children. She was surrounded by great grandchildren who provided her with the sounds of laughter and the sweet hugs she loved.

In lieu of flowers, the family requests that donations be made in her memory to Pipestone Area High School hot lunch program (Pipestone Area Public Schools, 1401 7th St. SW, Pipestone MN 56164) or a charity of one’s choice.