Cloquet High School musical will be over the top, in tribute to late director Landon Hall 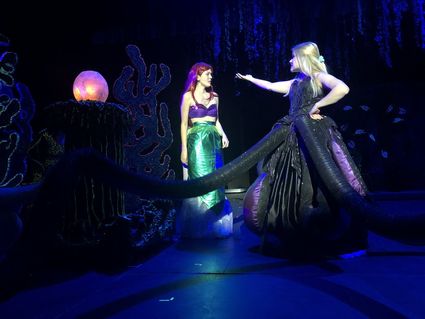 Ursula the sea witch (Sophia Brenner) explains how she can cast a spell that will give Ariel the mermaid (Isabella Roy) legs so she can pursue her human prince ... and what the terms of that bargain will be.

After 10 years of directing, Kevin Hamre had stepped away from the massive productions that are the fall musicals at Cloquet High School.

Shows that often feature between 70 and 100 young actors and singers, wearing amazing costumes and performing on sets that often takes months to craft in exactly the right way ... he'd left it all in the capable hands of former student, protegee and dear friend Landon Hall.

And then the 23-year-old director died, totally unexpectedly, of arrhythmia on June 8 while he was outside gardening on the first hot day of summer five months ago.

Hall had already chosen "The Little Mermaid" for the fall musical; he had even cast the main characters before school got out, so everyone could learn their songs over the summer.

After "directing" Hall's funeral at the newly remodeled CHS auditorium, school officials asked Hamre if he would take on the fall musical again.

"Gail (Kevin's wife) and I - and the rest of my team members, especially Iris Keller - said we absolutely have to go forward with the show, but only as a tribute to Landon," Hamre said.

The thing is, Hamre had never been a huge fan of "The Little Mermaid." He'd even told Hall that he was glad it was him directing the Disney show, not Kevin. Famous last words.

"Well, after his passing, I had no choice but to delve right into it, big time from mid-June to get up to speed with things," Hamre said. "I studied the script and plucked out the piano melody and parts day and night; then came the find for the costume companies and the (set) drawings from Iris (Keller) and Rich (Brummer) and I'm slapping myself every day now for thinking it was just a little girl's show. Shame on me! Was I ever wrong! It's a huge, incredible, phenomenal production!"

Most folks know the story of a forbidden love between a mermaid and a prince, written originally by Hans Christian Andersen, but modernized, seriously altered and made internationally famous and beloved by Disney, which also added fabulous fun music to the tale.

It's a show for anyone with a heart, said Hamre.

"Everyone should see the show, whether you're a 92-year-old grandmother or a 34-year-old dad," he said. "It's pure entertainment. Everyone will go home with a lesson learned, along with a warm heart, as you smile all the way back home."

The director added it was the perfect year to do "The Little Mermaid," as many of Gail's longtime voice students are graduating, so this will be their last musical hurrah at CHS.

Many of the lead roles are filled by seniors: Izzy Roy plays Ariel, the little mermaid, while Sophia Brenner shows a darker side as Ursula, the wicked sea witch who gives Ariel legs in a bargain the naive mermaid is almost guaranteed to lose. Senior Jordan Allen plays Prince Eric, kind and noble. Junior AJ Maijala plays officious court composer Sebastian the crab (with a fabulous Jamaican accent) while sophomore Sam Buytaert was cast as Flounder the fish, Ariel's adorable and not terribly bright guppy pal. Scuttle is played by Josh South and King Triton by Jonah Bryant-Nikko. Many other students have speaking and singing roles.

They're all doing great, Hamre said.

Hamre said it's been thrilling to work together with his old team again.

"It's so fun to see what they create," he said. "It's been like show-and-tell every night for the past four weeks. I stop the rehearsal and we all check out the costume or set piece and we all cheer and clap to its maker."

With 10 days to go, the cast members had their lines and songs memorized, and Hamre and his team were working with them to put the finishing touches on everything from the actors' movements on the stage to lighting to sound and costumes.

All the updated equipment in the newly renovated auditorium has made it even more special, Hamre said.

"It's spectacular," Hamre said. "It's so bright and cheery and the updated improvements help in every way to enhance our show. The lights and sound are the biggest improvements. We're certainly not in the dark ages anymore. Thank you, Cloquet!" 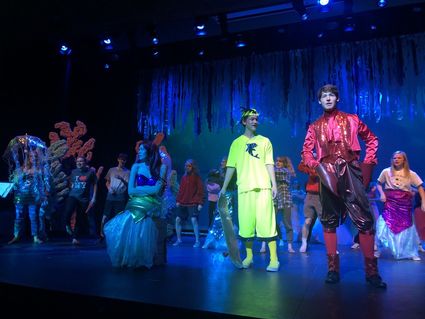 Sebastian the crab (AJ Maijala, left) sings about the joys of living under the sea to Flounder (Sam Buyteart) and Ariel (Izzy Roy) while various sea creatures dance their way around the underwater world.

"Hence why we're pulling out all the stops for this musical, being it was Landon's dream," he said. "And, hey, we really want to name the auditorium after him as well. "The Landon Hall Auditorium." Sort of has a ring to it, doesn't it?"