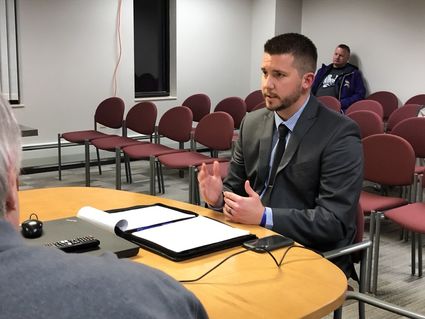 Tim Peterson, the city's top candidate for the Cloquet City Administrator job, answers a question from councilors during a second interview Tuesday. Peterson was the only one of the three finalists for the job who was asked to come for a second interview.

Only one of three candidates for the Cloquet City Administrator job - Tim Peterson - made it to a second interview, held prior to the City Council work session Tuesday.

Peterson, the current city administrator in Moose Lake and previously deputy clerk in Proctor, displayed a good understanding of both the issues and strengths of Cloquet, in a question and answer session with councilors that went both ways.

Peterson asked councilors what they see as priority projects for the city. Answers ranged from water treatment, to fixing the ice arenas, digging into the police study, asking the Legisla...