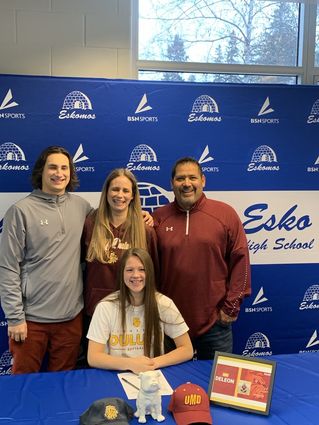 Esko's Dea DeLeon signed her letter at Esko the week before with her brother, Stone; mother, Desi; and father, Tony DeLeon. More photos at PineKnotNews.com

Kiana Bender, Dea DeLeon and Taylor Nelson may attend different local high schools, but the trio have at least two things in common. The first is that all three play hockey for the Cloquet-Esko-Carlton Lumberjack girls hockey team. The second is the fact that all three signed National Letters of Intent this past week to play sports in college.

Bender and DeLeon will play softball at UMD and Nelson will play Division I hockey at Bemidji State.

"I wanted to stay close to home and UMD was also the school I've always wanted to attend since I was a kid," said Bender, who goes to school in Cloqu...