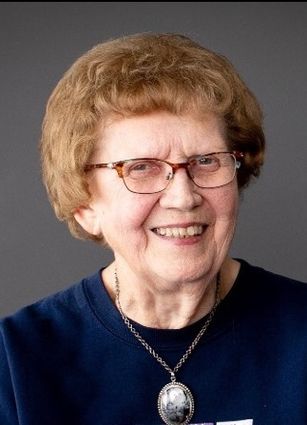 Elizabeth A. “Betty” Starkey, 86, Jamestown, North Dakota, passed away surrounded by her family on Sunday, Nov. 24, 2019 at Ave Maria Village in Jamestown.

Betty was born July 14, 1933 at the home farm in Splitrock Township, Minnesota, the daughter of George and Stella (Poslusny) Greske. She graduated high school in Moose Lake, Minnesota in May 1951.

She worked at the Diamond Match Mill in Cloquet, Minnesota until she met her husband Roger Starkey. She and Roger Merlin Starkey were wed on March 30, 1957 in Cloquet, and made their home in Esko and Little Falls, Minnesota, where they raised seven children. In 1974 they moved to Jamestown, where she worked as a sales clerk for White Drug and later Ben Franklin. Betty later became a dispatcher for the James River Senior Citizen Center, and was named Dispatcher of the Year by the Dakota Transit Association in 2007. She retired at the age of 80, and continued with her crafts to keep herself busy.

Betty was a member of the Basilica of St. James in Jamestown, and her faith was very important to her. She had a passion for crocheting and was known for her famous pot scrubbies. She entered several crocheted items, such as bedspreads with extravagant details, which won many blue ribbons at the Stutsman County fair. Betty enjoyed crafts and showing her grandchildren how to make many different things. She liked to be around people, and helped out when she could. Betty loved spending time with her children, grandchildren and great-grandchildren. Many hours were spent completing jigsaw puzzles and getting the “Greske giggles.” She was very proud of her Polish heritage, including her love of polka music, which now lives on in all her children.

She was preceded in death by her husband; parents; one son, Gerald (Butch); one grandson, Matthew Finck; one great-grandson, Colson Dack; one brother, Arthur; and two sisters, Celia and Delores.

A Mass of Christian Burial was scheduled for 10 a.m. Wednesday, Nov. 27 at the Basilica of St. James in Jamestown. Arrangements by Haut Funeral Home and Celebration of Life Center, Jamestown.