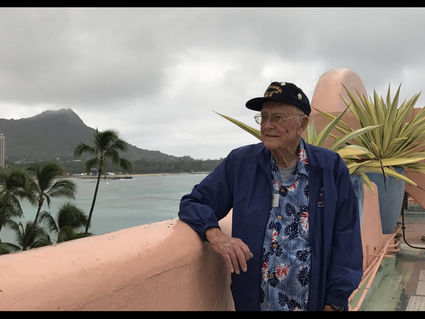 Some memories never fade. Don Long remembers the morning of Dec. 7, 1941 like it was yesterday.

The Barnum High School 1939 grad had been at Kaneohe Bay Naval Air Station in Hawaii for about only two weeks when the Japanese attacked Pearl Harbor, an act of aggression that catapulted the United States into World War II.

"I was a Seaman Second Class, the lowest animal in the Navy," Long said in a phone interview from his home in Napa, California this week. "I'd been to boot camp and radio school, and they'd assigned me to a flight crew as the second radioman."

Now 98 years old, Long remembers the Japanese attack clearly. He was the sole person aboard one of four Catalina PBY-5 airplanes anchored out on the bay, having been dropped off at about 7:40 a.m., and was getting ready to practice signals with the tower on shore.

He remembers seeing between 30 and 40 planes fly overhead.

"I assumed it was the Army out doing exercises, although it seemed weird for a Sunday morning," he said.

Shortly after that, bombs started falling on the hangar area at Kaneohe as Long watched. Located across the island of Oahu, Kaneohe Bay was attacked five minutes before Pearl Harbor.

"Within minutes fighter planes came in, we think, they hit the planes on the water first. The theory being they didn't want any planes coming up to challenge them," Long said. He was a radioman, not a pilot, and couldn't have flown the plane or shot at the Japanese without the rest of the crew.

Within a minute or two all the planes were aflame and burning, even the water outside of the Long's plane was on fire.

"They hit the wing tanks, and almost immediately the entire plane was engulfed in flames - with me in the middle," he said. "At this point, I knew I had to get out and I dashed toward the rear exit through the flames with no more thoughts of a life jacket."

Long jumped into the water, through more flames, and swam to a buoy about 200 yards away, collecting some first- and second-degree burns on his hands and face in the process. He had to remove his boots after swimming about 20 yards because they got so heavy.

"I didn't have a life jacket, so I swam there for support," he said. "I also figured if they made a run on me in the water, I could get under the buoy and be safe. But I never noticed any attempt on me. I'm certain their instructions were to keep the planes on the ground."

All he could do was watch as the Japanese pilots continued to bomb the naval station, blowing up more hangars and airplanes, maybe half a mile away from where he was perched in the water.

"A second wave came at about 9 a.m.," he said. "I think they bombed and strafed the shore facilities again. At about 10 things settled down again."

About half an hour later, he saw a boat coming out to look for survivors. Long was the only one of the four who were guarding the planes to make it.

When they got back to shore Long was greeted by squadron mates, telling him they thought they'd never see him again.

"I probably looked pretty bad, with oil all over my body and clothes," he said. They took him to the sick bay, a little hospital that was bursting at the seams.

"There were guys with serious injuries, all the chairs and bunks were full," he said, noting that the medical staff examined him quickly, put a survivor tag on him and told him to wait, which was fine with Long. "I sat on the floor a couple hours while they treated other guys. Later they treated my burns with some kind of salve, bandaged me and I was returned to duty."

Long would spend the next two nights sleeping on a beach with a group of 20-30 other squadron members, waiting for another attack.

"A confusion reigned everywhere," Long said. "We all expected an attack, a landing party. Fortunately, that never happened."

Only 20 people died in the attack at the fairly small Kaneohe Bay Naval Air Station, but, according to history.com, more than 2,500 died in the attacks on Pearl Harbor and six other military bases on the Hawaiian island of Oahu and 1,000 more were wounded. Eighteen American ships and nearly 300 airplanes were destroyed.

Long received a Purple Heart medal and went on to serve across the Pacific, including Midway, Johnston Island, the Fijis and Guadalcanal.

"There were still Japanese on the island then," he said, referring to Guadalcanal. "Sometimes there would be raids by land forces at night, but the Marines and Army usually kept them at bay."

The Japanese never captured the airfield.

After Guadalcanal, Long was assigned to flight school back in the U.S. He never returned to combat. He was assigned other Navy duties for the remainder of the war.

Long stayed in after the war, spending a total of 22 years in the Navy and ending his career as a commander.

After that he was a teacher for 15 years, then got his Coast Guard license and became a charter boat skipper, making regular runs from San Diego to Cabo San Lucas in Mexico for about 10 years.

Even in retirement he remained active and, until a couple years ago, drove cross-country every summer to come fishing in Minnesota and Canada and spend time with friends and family, like his niece, Brenda Alanen.

"I try to keep the stuff above the shoulders alert, even if stuff below the neck isn't so hot," Long said, referring to mobility issues he's been struggling with, even as he continues to go to a gym regularly. "I've been smiled on by someone up above. I've had a life as an older man that's been pretty great. But I do miss coming back to Minnesota.

Back to the battle 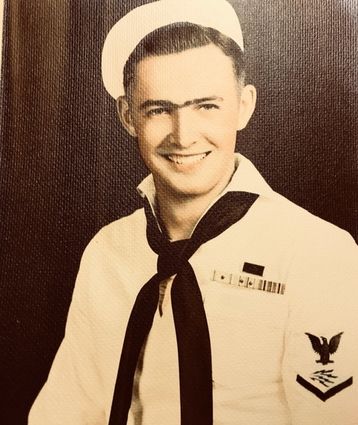 Three years ago, Don Long returned to Hawaii for the 75th anniversary of the attack on Pearl Harbor. He is there again this week with five other survivors, courtesy of the Donnie Edwards Best Defense Foundation, which focuses on taking World War II veterans back to their battlefields.

Long was excited to make the trip again, he told the Pine Knot News Monday. He said a team of students from the University of Hawaii discovered the wreckage of a Catalina PBY-5 plane in 2015, very close to where Long saw the plane he’d been guarding sink all those years ago, and he’s hoping to go there again.

“Maybe they will take me out to that same spot of water as 78 years ago,” he said. “The wreckage of that plane … shows up plainly on the depth finder on the boat. So I hope I will be sitting on the same piece of water where I was 78 years ago.

“It’s very nostalgic,” he said. “The last time I was there, we put leis on the water in remembrance of the other guys who weren’t so fortunate as me.”