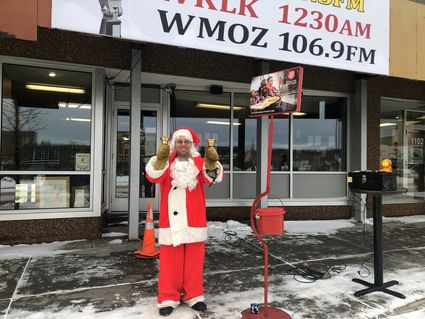 Volunteer Chad Erickson put on a Santa suit Friday morning to ring the bells for a special Salvation Army Red Kettle appearance outside the WKLK studio on Cloquet Avenue. The money that holiday shoppers put into the Red Kettles goes to fund local programming by the charity, but they need more volunteers.

While the Salvation Army's Red Kettle fundraiser runs only through the weeks leading up to Christmas, the proceeds pay for local social services programs for the entire year, according to David Westerberg, Salvation Army case manager.

That's why it's vitally important they get enough volunteers to staff the kettles, which are located at the Super One, L&M and Walmart stores in Cloquet.

"A manned kettle with a bell ringer usually averages about $30 or $40 an hour, versus an unmanned kettle, which brings in zero dollars," he said, explaining that for security reasons the Salvation Army can't leave the kettle out without someone next to it.

Most of the volunteer spots inside Super One and L&M are filled, Westerberg said; it's the outdoor spots at Walmart where they're struggling to find volunteers.

Westerberg said the proceeds from the Red Kettles funds all the social services programs, including rental assistance, energy and utility bill assistance, "anything that people might ask for help with," he said.

"We've helped people with supplies to get back to work, like uniforms. We bought tools for someone that was going into a mechanic's program. We can help with just about anything, vouchers for people who are moving into apartments so they can get pots and pans, dishes, furniture and stuff like that."

Anyone willing to volunteer is asked to call kettle coordinator Sue at 218-277-0745, or go to http://www.registertoring.com and enter the Cloquet zip code 55720. Shifts are two hours long, and they especially need people to ring during weekdays at Walmart, as volunteers are harder to come by during the workday.

People can sign up to ring individually or with a group, whether it's a bunch of folks who like to sing Christmas carols to shoppers or a family that wants to give back.

"We encourage little kids. One, it teaches them it's an easy way to give back. Also, studies have shown that when little kids ring, people are a little more generous," Westerberg said. "A lot of families sign up every year and tell us it's part of their family tradition."

"It's a lot of fun, especially when you're outside at Walmart, because as the holiday season stretches on and people get a little stressed or overwhelmed, a simple 'Merry Christmas' or 'hello' can brighten their day," Westerberg said. "I did it a couple years ago in the middle of a gentle snowfall and it was quite relaxing to be there ringing the bell in the snow."

New this year, for folks who don't usually carry cash, are electronic payments. Each bell has a QR code which, upon being scanned, leads to a donation page where people can donate via Apple Pay or Google Pay, as well as with credit cards, from their cell phones.