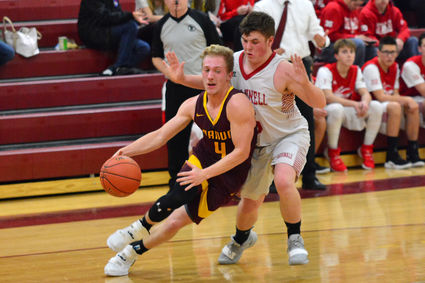 The 6-foot-3 senior point guard led the Cardinals to a 62-57 victory over the Bombers despite being down 22-8. Pocernich was assisted by teammates Gage Zoeller and Taye Anderson, who scored 19 and 13 points respectively.

"Our kids played better defense than they have in a long time," said Barnum head coach Richard Newman. "We were doing what we needed to do."

Not long after, the Cardinals came rumbling back. After falling behind early, the Cardinals went off. They scored 16 of the next 17 points, including nine in a row, to take the lead 25-23.

"We just started making our shots," said Cardinals head coach Bill Pocernich. "We started off slow but then we picked it up. I was really happy with our defense."

After a streaky half for both squads, the Cardinals led 31-27.

After a hard-fought second half by both teams, the Cardinals led 59-54 with 1:10 remaining in the game. During a timeout, Barnum's head coach told his boys the game plan.

"We just got to come down and shoot a three," Newman recalled. "We gotta play, have an aggressive trap, and if we don't get that then we have to foul."

After a few mishaps, sophomore guard William Richardson knocked down a 3-pointer to bring the Bombers within three with just 16.1 seconds to go. It was too little too late. With not enough time left, the Bombers were forced to foul in desperation.

After being fouled, senior Gage Zoeller made both of his free throws to give the Cardinals a five-point lead with just a few seconds to go.

Although there were rough patches on both sides, the coaches were pleased.

"I was happy with how our team played," said Newman. "They did a good job out there."

Pocernich added, "I didn't really know what to expect ... I was happy with our play."

Coming into the game, both teams had some adjusting to do for the new season.

On the Bombers side, only one player, senior Blaze Hurst, had varsity experience coming into this game. After finishing 13-14 last year, the Bombers graduated almost their entire varsity lineup. "We're young and inexperienced," Newman said of this year's team.

On a side note, Hurst dropped 24 points to lead the Bombers in scoring, while sophomore Joe

Peterson tacked on another 19.

"He's had trouble in the past," Newman said of Blaze. "But he was going up strong tonight and getting into a position so he could score."

On the Cardinals side, they came off a spectacular season that saw them go 20-3 enroute to winning the Polar League Conference Championship and the Section 5 A championship, bringing Cromwell-Wright to the state tournament for the first time since 1996.

Although still bringing back eight players from their section champion team, the Cardinals lost six players from last year's team, almost half their varsity lineup.

Still, the team is optimistic they can go back to the state tournament again this year. 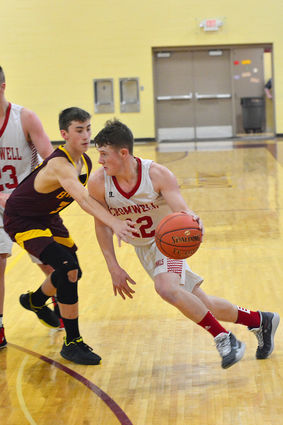 "There's about six or seven teams (in the section) who have a shot," Pocernich said. "I definitely believe we can contend again this year."

As for Barnum, in spite of returning only one varsity player from last year and starting the season off with a loss, coach Newman is confident of his team's ability to bounce back.

"Our kids played a lot better than I felt we would," Newman said Tuesday. "We were in it right until the end. That's what we want, a chance to win."

The Bombers visit the Crosby-Ironton Rangers Tuesday in a battle of the Maroon.

The Cardinals will be in action the evening of Friday, Dec. 6, as they travel to face off against the McGregor Mercs.