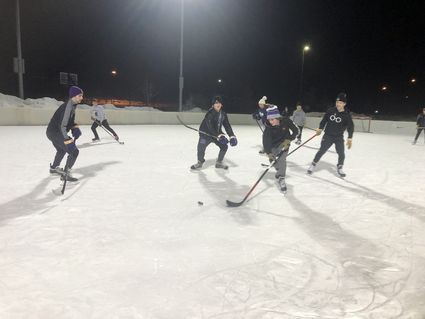 Cloquet senior Ryan Conway brings the puck down the ice while Drew Senich and Mason Avey ponder their next moves during a pickup game at the Pinehurst Park hockey rink Sunday night. Enjoy a video of the action Sunday on the Pine Knot News Facebook page.

It was all in good fun as a friendly game of hockey ebbed and flowed at the Pinehurst Park hockey rink Sunday night.

Everyone just kind of showed up, said Travis Berg, who was only watching Sunday due to a concussion from playing high school hockey. The informal pickup game included several past and present Lumberjacks hockey players. The boys soccer team was also well represented. It was, after all, a pickup game - just like Minnesotans have always played for generations with sticks, pucks, skates and warm clothes. There were not a lot of pads or helmets in sight.

"I kind of grew up outside," Christian Galatz said. The CEC varsity star grew up in Hibbing. "That's like all we did. I like playing outside because you don't really have any rules." 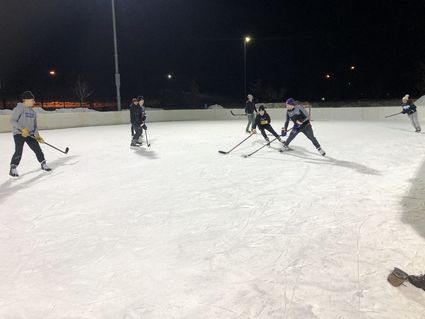 Drew Senich works to keep the puck away from current Lumberjacks star Christian Galatz Sunday. The players were a mix of past and current high school hockey players and others who like to play a good game of hockey outside when the weather gets cold enough to freeze the ice.

City hockey and skating rinks are ready to go and open to all at no charge. There are hockey rinks at Pinehurst, outside just south of The Barn at Pine Valley and at Sunnyside Park next to Churchill School, where there also is a pleasure rink. Athletic Park also has a free-skate rink.

The ice skating ribbon at Dunlap Island is open and cleared. People who don't have skates may borrow a pair of donated skates at the warming house there.

"There's a couple dozen pairs of skates in a variety of sizes there," said Karin Stedman, a city parks employee.

Scanlon has a hockey rink and pleasure skating rink at Sather Park on Washington Avenue. Esko has outdoor hockey rinks at the Esko Sports Complex on Canosia Road.