Wetlands are hidden gems in our landscapes

A forested wetland just upstream of Lac La Belle. These areas are often undervalued "swamps," but are essential in protecting water quality by holding back pollutants and slowing the flow of water.

Swamp. It's a word that can conjure negative thoughts and feelings. A place filled with dirty, dank, dark water. An area that is almost impassible and can literally suck your shoes right off. That swampy place where tons of much-hated mosquitos and swamp critters live and breed. Most landowners consider wetlands as useless areas that get in the way. Many want to fill them in, a practice in the past that has affected ecosystems.

The truth is that wetlands are some of the most important and productive ecosystems in the world. Today, they are recognized for what they are and what they do and efforts are being made to preserve wetlands and recreate them in areas where they were removed and are now needed and important.

"Protecting and enhancing wetlands is one of the most challenging and rewarding parts of my job," she said.

In the United States, wetlands (also known as riparian wetlands, estuaries, bogs, marshes, and swamps) are defined as "those areas that are inundated or saturated by surface or groundwater at a frequency and duration sufficient to support, and that under normal circumstances do support, a prevalence of vegetation typically adapted for life in saturated soil conditions."

What does that mean? Simply put, wetlands don't always have to be wet but do need to consistently have periodic saturation to support water-loving plants and animal life.

Each wetland area is different. Each has its own unique ecosystem, its own complex relationship between the immense variety of species of microbes, plants, insects, amphibians, reptiles, birds, fish, and mammals that live in that particular place under those particular conditions. It all depends on climate, landscape, geology, and the amount and movement of water.

But just what exactly do wetlands do and why are they so important?

First, one of the most important jobs and benefits of wetlands is their ability to act as "kidneys" for the surrounding landscape. This means that the soils, vegetation and aquatic life in wetlands naturally improve water quality by filtering water and absorbing nutrients and contaminants. Wetlands work hard by "removing nitrogen, phosphorus, and other pollutants before they enter a nearby lake, river, or, most importantly, our groundwater, Alness said. Wetlands are important in keeping our water clean and safe for drinking, bathing, and swimming. One acre of wetlands can filter about 7.3 million gallons of water every year.

Second, wetlands store water in their watersheds, acting like sponges that trap and then slowly release surface water, rain, snowmelt, and floodwaters. Wetlands play an important role in providing a place for water to flow and be stored during our large rain events like the floods that Carlton County has seen the last few years, Alness said.

The trees, roots and vegetation in wetlands slow the speed of floodwaters and distributes them more slowly onto the floodplain. This combined action of storing water and slowing it down can greatly lower the height of floods.

This is especially important in urban areas where wetlands are very valuable in helping to control the increased rate and volume of surface runoff from buildings and pavement during high rainfall or snowmelt conditions. Unfortunately, many urban wetlands have been drained or filled. In many cases, in order to control flooding, communities have had to pay for expensive dredge operations or to construct dikes and levees.

Third, and also related to flood control, is that wetlands act as brakes in controlling or eliminating erosion. Rapidly moving waters in floods are the largest cause of erosion on land and along shorelines, and erosion is the biggest cause of increased silt that degrades our rivers, streams, and lakes and reduces the habitat for aquatic animals and fish. By slowing down the impact of flood waters, wetlands are a key player in the work of erosion control.

Fourth, wetlands are life centers for fish, waterfowl and wildlife. Many species depend on wetlands for not only their water, but also their food and habitat. The shallow water, organic matter, and high levels of nutrients are ideal for the development of the organisms on the bottom of the food chain.

"You wouldn't think it but the water is teeming with tiny organisms that so many species rely on for a food source," Alness said.

The organisms become food for the upper levels of insects, shellfish, and small fish, which in turn become food for amphibians, reptiles, larger fish, birds, waterfowl, and other wildlife, especially during migrating and breeding times. Wetlands along migration routes are so important that an international agreement is in place to protect areas where birds feed. Many migratory birds are completely dependent on these wetlands that, if destroyed, could cause these birds to become extinct.

There are many fish, birds and animals that need wetlands to breed and raise their young, including ducks, geese, woodpeckers, hawks, and songbirds.

Wetlands are important as a resource for humans as well. We harvest a wealth of natural products from wetlands, including fish, shellfish, blueberries, cranberries, wild rice, and timber. Many commercial and recreational fishing and shellfishing industries harvest fish and shellfish that depend on coastal wetlands and marshes. Wetlands are also important for those who hunt waterfowl and those who trap muskrats, beaver, and mink. 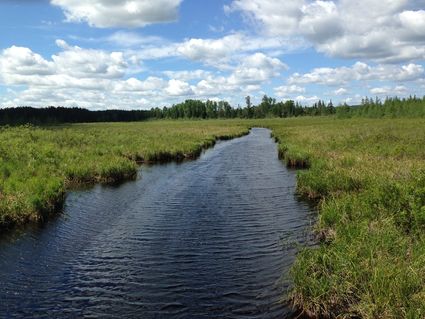 A riparian or floodplain wetland near the Net River.

Wetlands are also a playground. From bird watching to hiking, hunting to fishing, photography shoots to artistic pursuits, wetlands are filled with a variety of colors, textures, sights, smells, and sounds. Wetlands are very valuable for the recreational and aesthetic opportunities for everyone brave enough to explore them.

"One of my favorite landscapes to explore are wetlands," Alness said. "The diverse plant and animal communities are so unique. Quite a few of these species are extremely rare. The identification of an orchid, whose seeds are literally as small as a particle of dust, or the spotting of the tiny marsh bird, yellow rail, is like Christmas."

Kim Samuelson is the elected supervisor for Carlton County's SWCD District 4. Contact the SWCD at 218-384-3891, on Facebook (Carlton SWCD), or at http://www.carltonswcd.org.