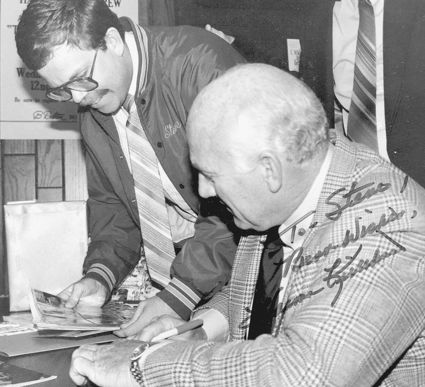 Korby first met Killebrew at a Duluth bookstore in 1986.

Have you ever had the opportunity to meet your childhood or, for that matter, adulthood hero? It could be a political or religious leader, a rock or TV or movie star, a sports legend, or maybe even an astronaut. Someone, if you were to meet face-to-face, you would be so awestruck by that observers would have to tell you to please close your mouth?

What makes a person a hero? Of course, people generally honor their parents and other family members, local clergy and elected officials, and even co-workers and others they consider mentors. We admire them. But to be put on a pedestal as someone's hero requires a bigger step. I think we try to emulate our hero's words and actions. In our minds, they can do little wrong. Is it a good thing, and do today's kids have heroes just like adults once did, or still do?

My hero story spans many decades. When I started my Little League baseball career in the early 1960s, the Minnesota Twins were a brand-new Major League franchise. Many in Minnesota, including me, were Mickey Mantle and New York Yankees fans. My friends in the neighborhood collected baseball cards and I had some hand-me-down cards from my brothers, so I started collecting too. One of the first packs I bought, for a nickel in 1962, included a Harmon Killebrew card. I still have that card. Harmon was rather slow running on the bases, struck out a lot, but he hit a lot of home runs. I had two of those three attributes, so it didn't seem like a stretch to adopt Harmon as my baseball hero. It has lasted forever.

I started clipping sports articles from the newspapers that bragged of Harmon's accomplishments for the Twins: "Killebrew hits upper deck in win over Angels," "Harmon smashes 400th home run." My buddies knew I was nuts for Killebrew. Every season thereafter, if they happened to get a Killebrew baseball card before I did, my negotiation skills vanished. Usually, I had to give up a Mantle, Willie Mays and Henry Aaron cards for ONE Killebrew card. Most would not consider this a fair deal, but it didn't matter to me.

Killebrew had a great career and eventually ended up in the Baseball Hall of Fame. I saw him play only a few times in person. My aunt and uncle brought my sister and me to my first Twins game in 1965 - the year the Twins won the pennant, but Killebrew was hurt and did not play. I saw only one of his 573 home runs in person. Very few Twins games were even on TV. You had to listen on KDAL 610 AM radio. I'd try to see him after he retired, if he came up to Duluth for the TwinsFest in the winter. I did get his autograph, but so did about 500 other people. It wasn't very personal. It was still amazing to see Killebrew; heroes are larger than life.

Then, in 1986 the Twins were celebrating their 25th year since incorporation. Killebrew was going to be at a bookstore in Duluth to sign Twins history books. I told my wife I was going to go on my lunch break. My wife drove to Duluth and got a picture of Killebrew and me, with him signing some of my fan club stuff. There was a big line waiting for autographed books. In fact, the bookstore manager tried to shush me along; there was a limit of one autograph each. Then Killebrew said, "Hold on, this guy has been a fan for a long time, I'll sign more." Wow, as if I weren't already a full-fledged Killebrew fan. Later, to top the day off, my friend and Premiere Theatres owner Rick Stowell stopped by my house with a gift. Without my knowledge, and as a surprise knowing how much I liked Killebrew, he had Harmon sign a book, "To Steve, the second-best cleanup hitter in Minnesota ... Harmon Killlebrew." Very special. The next morning my picture was in the Duluth News Tribune with Killebrew. Are you kidding me?

The saga continued. In 2004, my son told me about a golf fundraiser in the Twin Cities: "You might want to check this out." In fact, Harmon was the main sponsor for the inaugural Killebrew Classic tourney to benefit the Gillette Children's Hospital. Participating golfers included many current and past Twins and other sports celebrities. My wife and kids encouraged me to go as a 50th birthday present from them. It was a might spendy, but also a chance to see Killebrew, so I signed up for the tourney.

When I arrived at the Legends Golf Club in Prior Lake, I pulled into the parking lot next to a black sports car. Out of that car came 1991 Twins World Series hero Jack Morris.

"Boy is that a nice-looking car, where did you get it?" Morris asked me. When I told him it was a new Oldsmobile Intrigue that was purchased at Cloquet Auto in Cloquet, he seemed less impressed, but I was in celebrity shock and looking forward to a great day.

Since I got to the golf course early, I decided to go hit some practice balls. I went past the bar in the clubhouse and several current and former Twins (Kent Hrbek, Michael Cuddyer, Ron Gardenhire and others) waved at me. They were laughing and having fun and, I'm sure, looking forward to a great day. I hit a few drives on the practice tee and then couldn't help but ask the guy hitting balls next to me, "Are you Dick Stigman?" Dick was a pitcher for the Twins in the early 1960s. I had his baseball card, too. He shook my hand and answered yes, but then asked, "How did you ever know?" Stigman grew up in Sebeka, Minnesota. He had Mrs. Marguerite Weiss for a fourth-grade teacher. Well, so did I. Weiss and her husband, Nick (who also worked for the Cloquet school district), moved to Cloquet/Scanlon and told us she had taught Stigman a few years before. She would let us students listen to the radio for a while if Stigman was pitching for the Twins. Dick liked the story.

At the Legends course, I was assigned to the 18th hole. The tourney was a shotgun start, so there were golfers and celebrities on every hole. It was Killebrew's plan to hit shots with each group throughout the day. It just so happened, he started on hole 18. So now, prior to the shotgun going off, I'm getting to chat, mingle, get some photos, and soon golf with my hero. Unbelievable. For the record, Killebrew hit a drive about 300 yards down the middle of the fairway.

At the conclusion of the golf event, I had an opportunity to talk some more with Killebrew, but also to converse with Philadelphia 76ers basketball Hall of Fame guard Hal Greer (he told me some Wilt Chamberlain stories, another of my sports favorites), John Blanchard (third-string catcher for the 1961 World Champion New York Yankees, who happened to hit 20 homers and had five championship rings), Hall of Fame football linebacker Bobby Bell, who played for the Gophers and Chiefs, and Brooks Robinson of the Baltimore Orioles (another Baseball Hall of Famer). It was great for a sports enthusiast like me.

After that fundraiser, Killebrew and I exchanged holiday cards every year. In 2008, my family was planning a winter trip to Arizona. I had a family tee time reserved at a championship golf course and knew Harmon lived in nearby Scottsdale, so I figured even though it was a long shot, I would mail him a note asking him to join us. A few days later, when my wife and I came back to the house after snowshoeing, my son told me my cell phone had rung.

"Maybe it was Harmon Killebrew calling you," he said in jest. I listened to the message and, would you believe it, it started out, "Hello Steve, this is Harmon Killebrew ...." I about dropped the phone and was shaking. It really was him. He apologized that he couldn't golf with us because he was going to help the Twins in spring training in Florida. Amazing, my hero calling me. 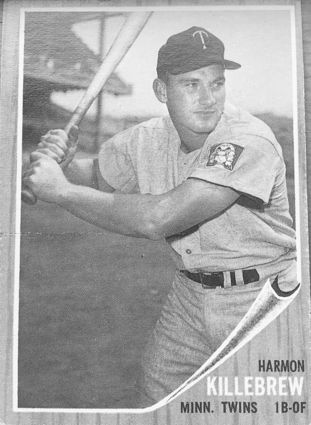 One of the first packs of baseball cards Steve Korby bought - for a nickel in 1962 - included a Harmon Killebrew card. He still has the card.

Well, Harmon passed away in 2011 from cancer. I received thoughtful sympathy cards from some of my old Scanlon baseball card buddies who were far from this area by then but knew how much I admired Killebrew. Harmon's wife, Nita, even sent me a copy of his funeral program from Arizona. It was sad and somewhat unexpected, as he was only 74.

Former Twins teammate Rich Reese called Killebrew "one of the classiest people I've ever met in life," adding, "He treated all people with respect, even with the stature he had." Maybe the accolades for my hero were cliché and just niceties, but I can attest he was the real deal and had attributes worth emulating.

Do you have a hero story that you'd like to share with Pine Knot readers? Have you ever sat down and had a cup of coffee with your hero? Did anybody in Carlton County ever date Elvis? Contact me at 218-878-9332 or [email protected] We'd like to write it down, get some pictures, and share your story.