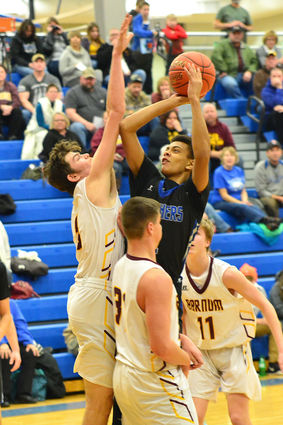 South Ridge's Noah Sertich tries to get a shot past Barnum's Blaze Hurst and Garrett Coughlin during Thursday's matchup at South Ridge. More photos at pineknotnews.com.

After a tightly played first half, the Barnum boys basketball team found a little something extra in the second half to take the game against South Ridge in Culver Thursday night. Barnum held a slim 20-19 halftime edge, then pulled away to a 60-51 victory by outscoring the Panthers 41-32 in the second half.

Joe Peterson led Barnum in the scoring department with 20 points, along with Ty Asperheim, who had 17 points. Many of the Bombers' points came in transition in the second half as they created numerous turnovers by the Panthers.

"That has been a problem for us all year," said first year South Ridge coach Phil Peliska. "We are just giving the ball away far too much and we are working hard on that in practice. We still lack some court maturity and we are just trying to avoid being our own worst enemy at times."

"We just don't value the basketball the way we need to," Newman said. "I am happy with the effort our team gives, but we have way too many turnovers. We really have only one to one-and-a-half guys with any returning varsity action and at times you can tell."

The game also lacked much flow as both teams were whistled for numerous fouls and both teams made it to the double bonus in both halves of the game. In fact, for the game the Bombers shot 31 free throws and the Panthers shot 21 free throws which was cause for a lot of stoppages in play.

"In the first half Joey (Peterson) carried the bulk of our scoring and then in the second half Ty (Asperheim) got hot," Newman said. "They switched up on defense and Asperheim was able to take advantage of it in that second half."

Barnum got some nice depth in scoring from Jake Hultgren with nine points, Blaze Hurst with eight points and Garrett Coughlin with seven points.

Leading South Ridge in scoring were Mason Lane and Austin Josephson, who each recorded 12 points. Also scoring for the Panthers were Ben Wood with nine, Jaxson Bennett with seven and six for Tristan Johnson. Kayden Palmi finished with four points. 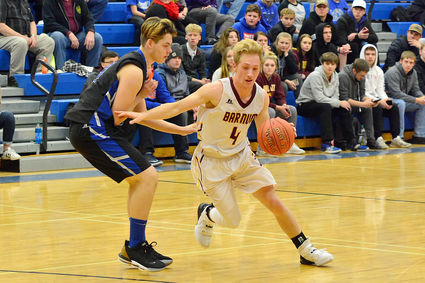 "We need to do a better job on the offensive end," Peliska said. "We are a score-by-committee type of team. We work hard at attacking the basket, but then we went just 12-of-21 from the free throw line and that isn't good enough. We are still trying to instill our system and our beliefs in what the program needs to be in order to be successful and that will take some time."

Peliska is in his first year as head coach at South Ridge and is still working his new systems into the program. Barnum is on the other end of the spectrum with a coach, Newman, who has been at the helm now for 18 years.

With the win, the Bombers improve to 2-3; with the loss the Panthers drop to 3-4.