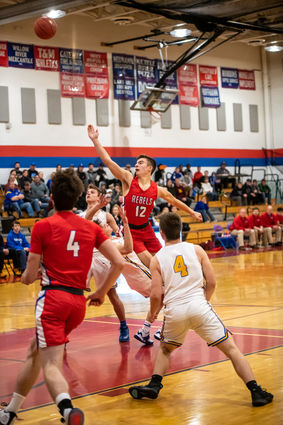 Friday's Esko-Moose Lake/Willow River boys basketball game featured teams that looked like mirror images of each other. In the end, the Eskomos overcame a 13-point deficit and managed to sneak out of Willow River with a two-point win.

"Esko is very similar in style to us offensively," said Rebels coach Wes Cummings. "We both look to spread it out, drive the ball and kick it for threes and play an uptempo game."

The game was played in front of a packed house and emotions ran high as the two squads did battle in a game that came down to an unusual set of circumstances after the Rebels had a pair of technical fouls called in the last minute of the game.

Trailing 72-70, the Eskomos gave the ball to Riley Fischer, who attacked the basket and was fouled. The Rebels were called for bench technical after complaints about the foul call. Fischer missed his two free throws, but Payton Wefel - who finished with 31 points - stepped up and made both technical fouls, making it 72-72 with 49 seconds remaining.

"Payton has been a high-percentage free throw shooter for a number of years," Esko coach Derek Anderson said. "I felt very confident with him at the line in those situations."

The tension continued. The Rebels were able to get the ball back, then Landon Kurhajetz was fouled and made a free throw to give ML-WR a 73-72 lead with 19.1 seconds left.

Fischer again was fouled and another technical was called on the Rebels, this time for a player encouraging the crowd as Fischer toed the line. Fischer made one free throw to tie the game and then Wefel stepped up and made one of the technical foul shots giving Esko a 74-73 lead with 1.5 seconds remaining. Following the in bounds pass the Rebels fouled quickly, but Wefel was able to make one of the two free throws making the final 75-73.

"We knew that they have a lot of guys that can hit the three and some very athletic guards that can create off the dribble," Anderson said. "It creates some big driving lanes when you have to stay home on shooters and all five guys have to be alert on defense because they have about eight kids that can attack and shoot."

In order to combat the high flying and long shooting Rebel offense, the Eskomos went to a zone defense during the second half which seemed to aid their cause.

"We were up on the scoreboard late and Esko switched into a zone and we didn't adjust well," Cummins said. "I should have made adjustments earlier. Mason Olson rolled his ankle with about six minutes left, so it hurt not having our best ball handler in at the end of the game."

The Rebels hit nine three-pointers during the game and Esko had eight long-range bombs.

"I'm actually surprised there weren't more three-pointers," Cummins said. "Considering the style of play of both teams, there could have been more."

James LeGarde also had a big day for Esko with 22 points, joining Wefel in double-figure scoring. 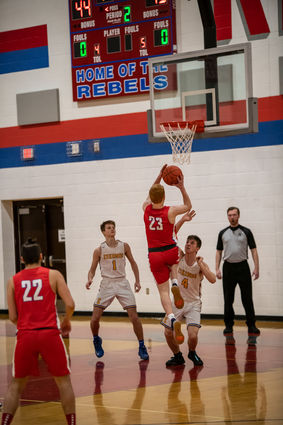 Also scoring for the Eskomos were Eli Blue with nine points, Riley Fischer with five, Jonah Randa and Braden Gabel scored three points each and Preston Lowe with two points.

"I was very proud of our team for grinding away and not giving up," Anderson said. "They have played a lot together in a number of big games and they don't get too high or too low."

With the win, the Eskomos improved their record to 8-2, while the Rebels dropped to 8-3.