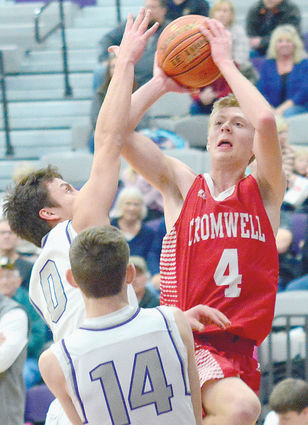 Micah Pocernich is the all-time leading scorer in boys basketball for Cromwell-Wright.

Micah Pocernich is now the all-time scoring leader in Cromwell-Wright boys basketball history. Pocernich poured in 27 points on Friday in a 68-43 win over Silver Bay and has now surpassed Pete Smith as the career points leader for the Cardinals.

Smith had owned the scoring record with 1,501 points since the 1993 season, but Pocernich flew by that mark and now has 1,506 points with more games left to play.

"Although this is an individual achievement that has required hundreds of hours of solitary work by Micah, nothing in basketball is achieved by yourself," said Micah's coach and father Bill Pocernich. "Micah has been fortunate to play with talented and unselfish teammates throughout his career, which has allowed him to achieve the milestones he has, and has allowed him to enjoy the experience of being a part of a team."

"Micah is a complete player and can score from all three levels, handle the ball, pass it and defend," coach Pocernich said. "Additionally, despite his gaudy numbers, he is an unselfish player. Micah has been fortunate to play with an abundance of talented, unselfish teammates that have helped him attain what he has to this point."