Where ski lessons are life lessons 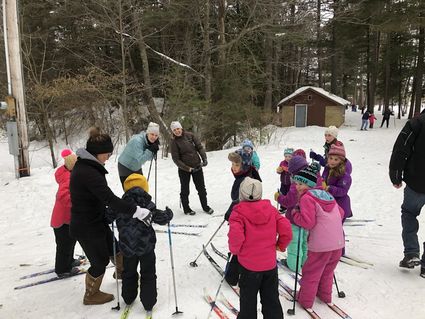 Not too long after he could walk, at age 2, Cale Prosen began skiing.

He started with the Cloquet Ski Club, under the tutelage of coaches Ken Ripp and Pat Marciniak, along with parent volunteers.

"I remember playing a lot of games and having fun," Prosen said. "It was always fun being on the trails.

Now a sophomore at Cloquet High School and on the varsity Nordic ski team, Prosen said his love for skiing has not faded.

"It's a fun sport," Prosen said. "And having a positive team culture definitely helps."

It's a culture that is built into the Nordic scene in Cloquet, starting with the youngest skiers and their parents on a Sunday afternoon at Pine Valley and continuing through middle school, high school and beyond.

It's not just the skiers that make the program a great place to be, said CEC head coach Arne Maijala.

"Our biggest strength is how well everyone works together as a team," Maijala said. "That includes everyone: skiers, parents, coaches, ski club, school and city workers."

Skiers encourage each other to work hard and teach younger skiers how to wax skis or duckwalk up a hill. Coaches teach the skiers necessary techniques to help them succeed as well as keep a positive tone while motivating the team to reach their goals and have fun. Parents volunteer their time to help set up things and allow their kids to do the sport.

The school funds the team and the city allows them to have one of the best recreational places in the state to ski: Pine Valley.

The Cloquet Ski Club has been around in one form or another almost as long as Pine Valley has been a city park.

It was 1960 when Cloquet High School ski coach and teacher Joe Nowak convinced the Northwest Paper Company to donate land to build some proper ski jumps. The city got 40 acres of land for a park, and volunteer labor built the ski jumps and trails through the forest. The park became a hub of activity in the winter months. There was ski jumping, downhill skiing and Nordic skiing on the trails. Nowak paid $25 from his own pocket to the United States Ski Association and the Cloquet Ski Club was born.

In the winter of 1963-64, Mike Marciniak joined the Cloquet High School coaching staff and took over the Nordic ski program, also further developing the system of cross-country trails at the park over his years of coaching.

Today, the Cloquet ski club is still a fun way for kids to learn how to ski and a feeder program for the Nordic ski team. Many of the current high school skiers started at the ski club. The nonprofit organization is a great opportunity for kids ages 3 and older to learn how to ski.

Every Sunday while there is snow on the ground, the ski club meets at 2 p.m. for 90 minutes of skiing lessons at Pine Valley. It's an hour and a half of fun.

Jenny Rackliffe said the program has been perfect for her youngest daughter, 6-year-old Johanna.

"She likes to get out and do things but she's not super competitive," Rackliffe said. "And she has a lot of friends her age who like to spend their time together out here.

"We love the camaraderie and the price is amazing," Rackliffe added, noting that they spent about $75 total to join the ski club and rent equipment for the season.

From an outsider's perspective, a Cloquet Ski Club practice looks more like a social event than a practice.

The kids are surrounded by coaches, parents, and even some high school skiers, like top skier Benjamin Bauer, who help instruct the kids. There's a lot of milling about and skiing around the chalet for the first 20 minutes, before this week's kids are eventually divided into groups by age and type of skiing, then sent out with adults in various small groups.

In general, Marciniak and Ripp aim to keep everything light. Sometimes the kids play games like disc toss without poles, which helps them forget that they're learning how to ski because they're having so much fun. They ski on the groomed trails at Pine Valley, where they have the opportunity to zip along the same trails as the high schoolers do. Skiers learn basic techniques, little ones learn without even realizing that there is learning going on, and older ones enjoy more competitive practice time.

Parent and skier David Marc has been helping out at the Cloquet Ski Club for about five years now. Originally an alpine skier when he moved here with his young family, Marc said they looked for something they could all do together.

"This was perfect," said the father of skiers and ski jumpers Luella and Ephram.

Instructors say the primary goal at the ski club is not creating champions - although that is a welcome result - rather it's about giving kids a chance to learn and grow to love something that can become a lifelong sport.

Marciniak began skiing with the Cloquet Ski Club as a 3-year-old, coached by his father, Mike Marciniak, and Joe Nowak.

Pat said they still influence what he does today.

"Learning from my dad and other coaches, you kind of want to mirror what they do," Pat said.

Kids can warm up in the chalet with hot chocolate and other snacks, another incentive for getting out here.

"I just want to get skiers excited about the sport so that they'll continue to do it as they get older," Ripp said.

"There have been so many people that have done a ton of work [for this program]," Marciniak said. "We have a ton of great people."

Under previous coach Glenn Sorenson, the high school Nordic team almost tripled in size. This year, around 75 kids (grades 7-12) came out for the ski team.

"I think word got out that skiing is a cool sport," junior Ben Bauer said.

"The culture is really welcoming," said sophomore Harmony Tracy. "Everybody is supportive of each other and friendly."

"The culture has just made it a fun place to be, so people want to join the fun," Prosen said.

The family-like vibe of the ski club is a core part of the Lumberjacks Nordic team as well. Past skiers - such as Brent Smith, a standout at CHS who returned to coach later and still volunteers - other past and present coaches, parents and other volunteers have and continue to donate time, money and homebaked goods.

"The numbers wouldn't be where they are if they weren't here," Maijala said. "There's no way one or two people could connect like we connect with kids. They make those connections."

More recent champions, like Esko grad Raleigh Goessling, who won the state meet in 2010, and Aidan Ripp, who placed 12th last year, helped lay the foundation for the current team. So did Anja Maijala, who placed second at state her senior year and third her junior year. Both Maijala and Ripp returned to Cloquet to help out at the recent home meet.

The school team is looking to do well this season. "They want to be the conference champions and then make it to state," Arne Maijala said. "And I think they can do that."

"The ultimate goal is to have the people in this program skiing for the rest of their lives," he said.