Taking a walk with Oprah 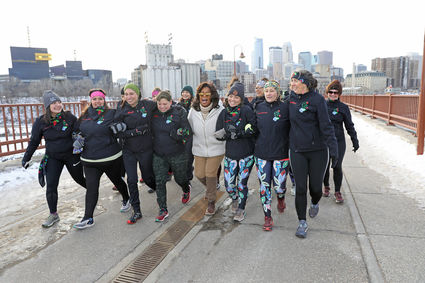 Members of Kwe Pack, the group of women runners based out of the Fond du Lac Band of Lake Superior Chippewa Reservation, gathered on the Stone Arch Bridge over the Mississippi River in Minneapolis Jan. 10 in preparation for the healthy living tour Oprah Winfrey brought to the city. The runners were shocked when Winfrey joined them on the bridge and talked about the inspiration the group has brought to others. The group presented her with a blanket of appreciation.

Kwe Pack has been up and running, literally, for nearly a decade. The group of indigenous women based out of the Fond du Lac Band of Lake Superior Chippewa Reservation run for wellness, socializing and share volunteer activities. They have been featured in national magazines and on television. The exposure caught the attention of Oprah Winfrey. So when she was planning to be in Minneapolis last weekend for her 2020 Vision tour, Kwe Pack members were asked to be a part of the event that focuses on empowerment.

"The Oprah team reached out a few months ago," Kwe Pack member Alicia Kozlowski said. They were trying to figure out how to highlight the group.

"We did not know we were going to meet Oprah or walk with her," Kozlowski said.

Winfrey spent a lot of time with the women on the bridge.

There is video on Kwe Pack's Facebook page that shows just how surprised the runners were when Oprah approached them as they gathered on the Stone Arch Bridge in Minneapolis last Friday. Shock. Jubilation. And then hugs all around.

The Kwe Pack women were decked out in new custom Heart Berry gear created by Kwe Pack organizer and artist Sarah Agaton Howes. She presented Winfrey with another of her creations, a renewal blanket, based on the tradition giving back to someone who has given of themselves and wishing someone to get through the winter.

Winfrey had been remarking about how cold it was that day. "Thank you, Sarah," she said. "I will be keeping this and needing this very much."

Agaton Howes wrote about the experience on the Facebook page. "We were grateful for the opportunity to represent indigenous women runners on a larger scale," she wrote. "We strive to inspire others and work towards a healthy self and healthy community. This was an opportunity to show the world that indigenous women do run. We are here being strong, resilient and healthy. We are not invisible."

The Oprah moments were captured by a camera crew from WCCO television along with a slew of photographs. Social media around Kwe Pack went wild with the images. 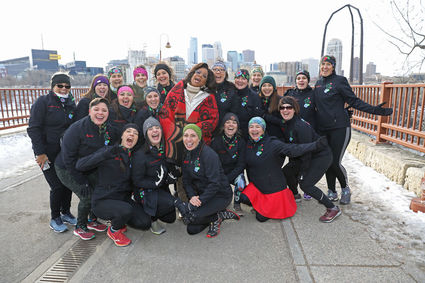 Kwe Pack's Sarah Agaton Howes gave Oprah Winfrey a blanket she created to thank her for her influence on the world. Winfrey joined the group Friday before her speaking event in Minneapolis later that day.

"There was overwhelming support and excitement," Kozlowski said. "We are a flashlight. We want others to absorb it. We put on a lot of miles in an effort to illuminate all of our people."

Kwe Pack is inspiring native communities across the country to replicate the group, Kozlowski said. "People are asking how they can start something."

The women run recreationally and in running events across the region, most often long-distance trail runs. Members have changed their lives drastically by being in better shape and making better life choices.

"These women have been doing this without an Oprah, without CBS cameras," Winfrey said during an interview on the bridge in front of the Kwe Pack members. "They are motivated to make their lives better on a daily basis."

When asked how Kwe Pack fit in with Winfrey's goals for her tour, she drew a warm hoot from the runners.

"They should be on the poster with me," Winfrey said.