Cloquet's Koby Bender is a player on the rise 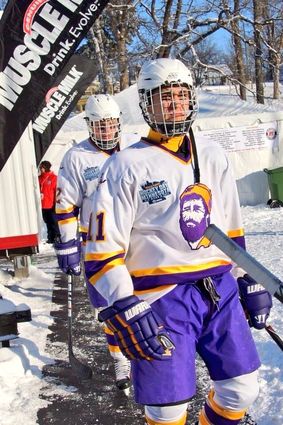 As a young child, Cloquet's Koby Bender had two goals: play college hockey and in the National Hockey League. The 22-year-old is on his way.

In his third year with the University of Minnesota Duluth, Bender is playing college hockey at the highest level for one of the best teams in the country. The Bulldogs have won the national championship the past two years and Bender contributed both years, making nine appearances in the 2017-18 season (he also qualified for the NCHC Academic All-Conference team that year) and scoring three goals and one assist in 2018-19. So far this season, Bender has two goals (against Minnesota and Denver) and two assists (against Denver and Colorado College).

Hockey seems to run in the family. Born and raised in Cloquet by his parents, Tony Bender and Brenda Gigliotti, Koby has two younger siblings, Kade and Kiana, who are also excellent hockey players.

Koby started playing hockey when he was 3 years old and recalls playing a lot of hockey outside as a child. It was one of his favorite things when he was growing up.

After playing through his junior year at Cloquet, Bender played for the North American Hockey League team Minnesota Wilderness team his senior year.

After a year with the Wilderness, he played a year in the United States Hockey League with the Chicago Steel (two games) and the Muskegon Lumberjacks.

Then the offer came. UMD gave Bender a chance to play Division I college hockey.

The Pine Knot News got a chance to chat with Bender and discuss his hockey career so far.

QWho has supported you most throughout your hockey journey?

AMy family. They've been amazing. I can't thank them enough for all they've done and continue to do for me. I wouldn't be where I am today without them. Also, all of my past coaches and teammates. They have helped me a lot. Through high school, juniors, and college, I've had a lot of great coaches and teammates who have helped me get better and have a lot of fun over the years. Most of my best friends have come through hockey and I'm fortunate to have met so many great people throughout the years.

QWhy did you forgo your senior season to play with the Wilderness?

AI chose to play with the Wilderness because I thought it would help my development more than playing in high school would. I was able to play with and against older, stronger, faster players. Also, it still gave me the opportunity to be in my hometown with all of my friends and family that I grew up with. I talked with my high school teammates about my decision and they were really supportive, which made the transition a lot easier.

QWhat were your emotions when you got the offer from UMD? 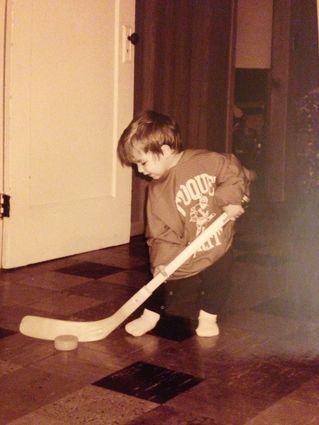 Koby Bender's transformation as a hockey player begins, as another youngster with a dream in Cloquet.

AIt was a super exciting. I grew up watching them and to realize I was going to be part of such a great organization was a dream come true. It's something I'll never forget.

QWhat has winning national championships in your first two years been like?

AWe've been fortunate as a group to go two-for-two, winning championships as both freshmen and sophomores. We use that as motivation to keep winning. Having that target on our back is always a good motivator. The goal is always to keep getting back to that final game of the year and win.

AJust wanting to get better every day and trying to be the best I can be. The past few years at UMD, we've had the right people. We constantly push each other to be better both on and off the ice. I think that's a huge reason why we've been so successful.