Tim Krohn of Cloquet commissioned these three matched wood art scenes by Leah Hammond. The artwork features woods that Krohn brought back from overseas as a Peace Corps worker.

Leah Hammond stood on the showroom floor of her family's woodworking business in Cloquet. Beside her was her latest hand-crafted wall hanging, an elegant testimony to her creativity and craftsmanship.

But this was no ordinary wall hanging. Six feet tall and made of precisely cut pieces of wood intricately assembled into geometric patterns, this was solid craftsmanship becoming art. The work clearly evoked the patterns of a meticulously-made quilt.

Hammond began to tell the story of how her artistry has grown out of - and been inspired by - family traditions and skills.

"My mom grew up in North Dakota, and she always loved barn quilts," Hammond said. She described how barn quilts are usually painted on plywood with patterns reminiscent of a fabric quilt, and hung on the side of a barn.

"Since we don't have a barn, I made her one for our house. But I made the pattern out of wood instead of painting it," Hammond said. "I cut all these geometric patterns, assembled them, and put exterior finish on it. It was similar to this one, but a little more 'quilty' looking."

Hammond's artwork utilizes a variety of wood species and finishes that highlight contrasts in the wood. The overall effect is a balanced composition of organic woodgrain and tone.

It's the same type of craftsmanship for which her family's business, Morning Star Woodworks, is known. Hammond grew up around the business her parents founded in 1982.

"In high school, my dad always wanted me to come work in the summers," she said. "I really liked art and he thought I'd be good in the finishing department. But I was like, I don't want to work with a bunch of guys."

Later, as Hammond played soccer and studied sports medicine at the University of Wisconsin-Superior, she began to wonder what her future might look like. She decided she'd like to take a step back from the career path she was on.

Her dad again suggested she come to work for him, as he needed a finisher (someone who sands and applies finishes to woodwork) in the shop. He told her that she could take her time and decide what she wanted to do from there.

"I started in the finishing department," she said. "I got trained on how to spray all the varnishes and staining and painting and all that. For the first few years it was just the finishing side of things. But, little by little, I got more into the actual craftsmanship part of it, and I ended up falling in love with woodworking."

That was 12 years ago, and Hammond has not returned to school since.

After the initial barn quilt project for her mom, Hammond made a cribbage board and case with an accessory drawer for her dad.

"Cribbage is a Hammond family tradition," Hammond said. "My grandpa loved it. And so every time we'd have holidays and get-togethers, we'd have cribbage tournaments."

After her grandfather passed away, Hammond wanted to give a gift to her dad that would be special. She settled on the idea of incorporating the woodworking craftsmanship that her dad loves with different species of woods in a cribbage board.

Her dad loved it, and Hammond is now working on another for her brother-in-law.

Hammond has followed up those early works for her parents with a stream of art for family and friends as well as commissioned works. These artworks range from cheese trays and cutting boards made with unusual woods, to wood-cut mountain scenes, and an exquisite wood picnic table and benches.

Tim Krohn, a long-time friend of the Hammond family, spent time in the 1970s in Africa and elsewhere around the world doing forestry work with the Peace Corps. He brought back samples of several species of wood - including eucalyptus and African pines.

"I saw her work on Facebook and I knew it was the right thing to do," Krohn said. "We started talking about it over a year ago, and she finished them a few weeks ago, just before Christmas."

The three pieces that Hammond created are matched day and night mountain scenes.

The variety of woods that serve as Hammond's usual palette is extensive, and sometimes exotic. She might mix quilted maple with walnut, zebra wood, Brazilian cherry, or purple heart from South America. It is her finishing skills that make these works a visual feast.

Not one to rest on her artistic accomplishments, Hammond is pushing forward, exploring new ways to enhance and present the natural beauty of the woods she loves. 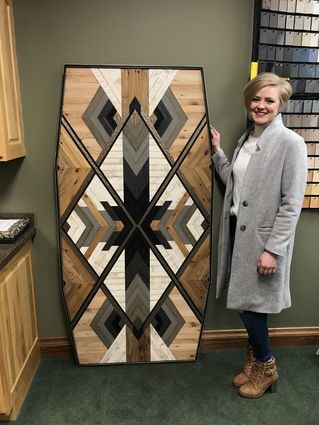 "This year, I want to start trying a lot of new things," she said. "I just got a wood burner, so I'll be trying to get into wood burning a little bit."

An even bigger challenge awaits her on one of the workbenches in the shop. Hammond's next big project involves a large slab of cypress, cut horizontally near the root, that she plans on making into a resin table - sometimes called a "river table" - and she's excited about it.

"Yeah, I actually got a tree trunk slab, and that's my vision for it," she said. "But there's a lot of reading up to do on it still because you have to have a temperature-controlled room. If it dries too fast, because the resin is really hot, it can crack. And so I have a lot of studying to do before I attempt it."

Leah Hammond is one of the lucky few who get to work at something they are passionate about, a unique place where craftsmanship and creativity conspire. "I love it. I can't imagine doing anything else," she said.