The Jug stays in Carlton for boys 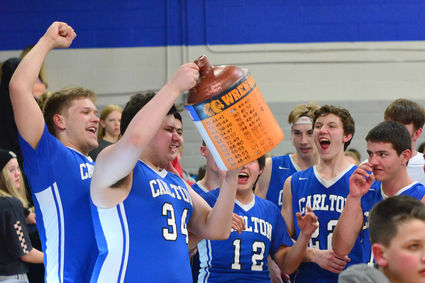 Carlton retained the Jug for another year this week after defeating Wrenshall at home. Because both schools share fall sports, the rivalry has tamed somewhat. Many of the players Tuesday played together on the Raptors football team.

Things had to feel a bit different in Tuesday's tilt for the Little Brown Jug in Carlton. The Bulldogs hosted the Wrenshall Wrens for the annual "battle for the jug," but this was the first year the teams played each other for the jug after having competed on the football field in the fall together as a cooperative team. In the end the Bulldogs won 53-33 and held onto the jug for another year.

"I think it did feel different for the kids and for the coaches," said Wrenshall coach Jon Bartczak. "The coaching staff could tell how the game felt different."

Carlton hunkered down defensively in the first half and held the Wrens to just eight points as the Bulldogs took a 25-8 lead into the locker room at halftime.

Things became more difficult for the Wrens in the second half when Randy Wimmer got in foul trouble and fouled out with about nine minutes remaining.

Wrenshall struggled to defend Carlton's big man in the middle, Ben Soderstrom. Soderstrom, who had seven first-half points, added 12 more points in the second half for a game-high 19 points. Soderstrom is now nearing the 1,000-point mark in his career.

Matt Santkuyl scored nine points and Justin Swanson added seven for the Bulldogs. Cade Northrup chipped in with five for Carlton, with three points for Ryan Gray, Adam Hey and Trevor Ojibway. Sawyer Thorman and Austin Parker each had two points and Spencer Rousseau had one.

Mason Perry led the Wrens with eight points, followed by Isaiah Johnson, Randy Wimmer and Hunter Holmes, who each recorded five points. Austin Larva finished with four for Wrenshall while both Tim Swenson and Kaden Olson had three points each.

The win improved the Bulldogs to 7-7 overall and the loss dropped the Wrens record to 1-7.

On a side note, Bulldog assistant coach Ross Korpela was thrust into the lead coaching role on Tuesday night as head coach Shawn Filipiak was ill.

The Bulldogs smothering defense was just too much for the Wrens to overcome in Monday's girls basketball game in Wrenshall. Carlton allowed 14 points to the Wrens in the first half and then cruised to an easy 69-37 win on the road. The win was Carlton's first win since Dec. 26 and helped them snap a four-game losing streak.

A little over a month ago, the Bulldogs beat Wrenshall in Carlton in the Jug game by 47 points, so from the standpoint of the Wrens there is some consolation that the team has improved since earlier in the season.

"Monday night's game with Carlton was tough, but not as bad as the score might indicate," said Wrens coach Daimen LaFave. "We traded possessions with them, but they were able to capitalize and we weren't - that's been our downfall."

The Bulldogs zipped out to a 36-14 halftime lead and then outscored the Wrens 33-23 in the second half to pick up their eighth win of the season. 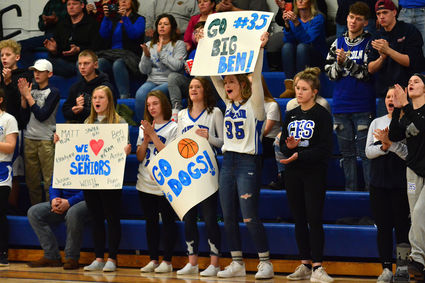 A big key to the victory for Carlton was balanced scoring with three players in double-digitscoring. Alaina Bennett poured in 18 points plus Abby Mickle and Elizabeth Hey had 16 points each. Brynn Mickle contributed six points, Sam Matarelli and Bella Anderson had four each, while Kaylee Asleson recorded three points and Madde Asleson had two.

"Overall we've improved dramatically," LaFave said. "The team is working hard at correcting mistakes. They are starting to take ownership of their team, and they have made big strides so far."

The loss dropped the Wrens record to 1-9.