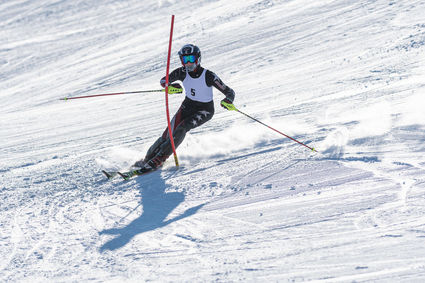 Senior Jonah Laundergen had a combined time of 1:22.79 for 21st place on the Mont du Lac ski hill.

With lots of natural snow and overall pleasant temperatures, it's been a great year for alpine skiing so far, said Cloquet-Esko- Carlton coach Ryan Zimny.

With 11 girls and five boys, the veteran coach said he has a small but nice group of kids to be on the hill with this year. They graduated a couple boys last year, including Thomas Heren, who finished 10th at the Minnesota State High School League Alpine Slalom championships last year and third at sections.

Zimny said he expects Regas to be in the mix to go to State this year, and noted that Madysen Waters has really started coming on strong lately.

"I wouldn't say it's a surprise since she trains hard and is making the natural progression, but it's fun to see her getting better results," he said.

He's hoping more kids will come out next season, noting that the program has extra race equipment that skiers can borrow. Buying a ski pass bumps up the cost more than some sports, but he figures it's still less expensive than hockey for kids who want to do a winter sport.

Zimny - who raced for CEC in the 1990s - said he loves coaching alpine, noting that he's been involved in some way with CEC skiing for close to 30 years. 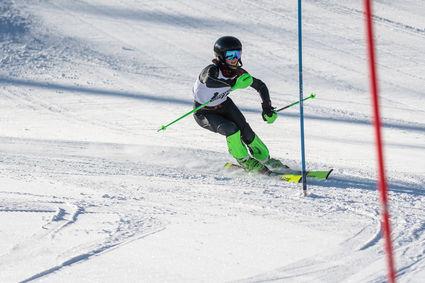 Emily Regas had a combined time of 1:15.93 for eighth place at the Duluth Public Schools Invite.

"It's rewarding because by nature, if a kid is willing to be outside in winter, they are by design hardy and you don't get whining," he said. "It's a great sport because although we are a race program, the main goal is to produce good skiers that will enjoy the sport long into adulthood."

On the other hand, it's also challenging "because it's such a technical sport, and it just takes one tiny mistake to end a good race run."

Hesaid each skier gets two runs, and the results go by combined time, not the best run. A skier is disqualified if they miss a gate or if they lose both skis in a fall.

"If they miss a gate but hike up to get around it, they are not DQ'd, but the loss of time means that they will be out contention since it's a sport of 10ths of a second, and adding seconds is pretty hard to recover from," Zimny added.