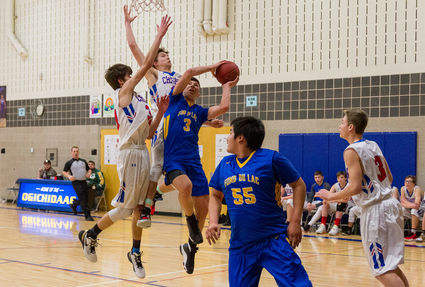 Fond du Lac's Connor Barney goes up for a layup last Friday in a home game against Chisholm. After a slow start, the Ogichidaa turned things up in the second half for a 91-86 win.

Trailing by a point at halftime against Chisholm did not sit very well with Fond du Lac boy's basketball coach Earl Otis last Friday night. The Ogichidaa came out lethargic and the head coach felt an uplifting halftime speech was needed to give his team a spark. Fond du Lac responded in a positive fashion by coming out and scoring 55 points in the second half on their way to an impressive 91-86 home win.

"It was just a night where the boys were not into the game at the beginning and I felt they needed a little talking to at halftime," Otis said. "I was extremely happy with the way we came out in the second half."

His little halftime speech might have been far more colorful than he let on, but in the end the Ogichidaa took off and handled the Bluestreaks.

"In the first half we didn't shoot well and we weren't aggressive," Otis said. "In the second half, the guys started to drive and kick the ball out and there was just a much better flow to the game." 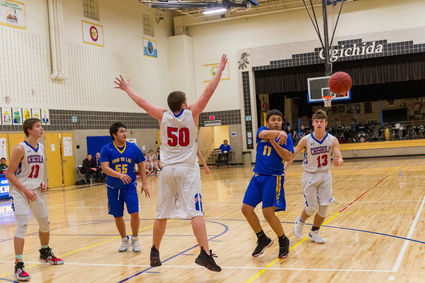 "Conner (Barney) is just a real good athletic post player for us," Otis said. "Our offense starts with Conner. He not only had the 32 points, but he also had 12 rebounds because he is quick off his feet to the glass. It was just odd because the first half looked like we were sleeping. The crowd wasn't into it, our players weren't into it, but in the second half we came out hot and played better which then got the crowd going as well."

Fox was also singled out by the coach for his play at point guard which Otis felt was the best game of the season for him.

The win did not come easy as the Bluestreaks had a pair of 24-point scorers in Bryce Warner and John Mitchell, plus Jude Sundquist had a 19-point night and July Abernathy scored 15.

The victory was the sixth of the season for Fond du Lac.