Esko musher has trouble on the trail

Harrowing times in the Beargrease race 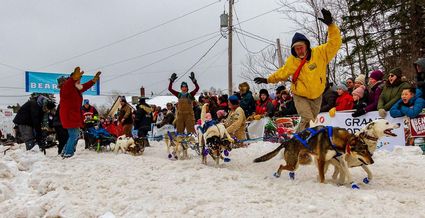 When Alex LaPlante's third leg of the John Beargrease 120 sled dog race started, things went suddenly and dramatically wrong: Her sled tipped over right as the dogs were taking off after the countdown for the final leg of the race Monday from Finland to the Trestle Inn.

"I got dragged out of view of the checkpoint, hanging on to my snow hook," LaPlante said. "At first I thought I lost the team ... I lost my grip on the handlebars, but suddenly my left arm went taut and I realized I still had the snow hook. I was just hanging on because they were really strong."

LaPlante, from Esko, was one of two Carlton County residents on the trails this week. Wrenshall's David Little competed for the first time in the Beargrease 40.

The veteran LaPlante said she could tell the dogs knew something was wrong because they would slow down and almost pause, then take off again. She finally thought to holler "woah."

It worked, but not all the way. The dogs stopped, but they took off before she had actually gotten the sled totally upright.

"They kind of have a clue, they just don't have any patience," she said.

Ultimately, she did manage to right the sled and made the first turn and road crossing in control of her team of eight dogs. LaPlante went on to finish 15th Monday in the mid-distance race, after taking sixth place last year.

The Beargrease 120 is actually closer to 108 miles, but LaPlante and at least one other team actually raced 120 miles after missing a turn on the altered course and racing all the way to Sawbill before realizing the mistake. In total, four teams missed the turn, she said, although two of them realized their mistake sooner than she did.

LaPlante told the stories of this year's mishaps as a way of explaining why she would rather be the one racing with the dogs than the dog handler, even though that might seem like the logical role for the veterinarian. Her husband, Dave Mills, acts as handler, along with others from Maple Ridge Kennel.

"Being a handler, you have very little control over anything, you're just sitting and waiting," she said. "My husband had a horrible experience - two of them this race - with not being able to do anything."

After her dramatic takeoff in Finland, LaPrairie said Mills was trying to find out from race organizers where there was someone who could help her if she was unable to get the dogs and the sled under control.

"All they would say is you can't help her," she said. "He's saying, 'I know, but is anyone else going to help her?' but not getting any answers."

Happily she did get things under control and volunteers at the next road crossing reported back to the checkpoint that all was well.

When she took the wrong turn toward Sawbill, Mills was watching on the tracker. But neither he nor LaPlante had a cell phone - allowed for the first time this year - and they likely wouldn't have had service there anyway.

"He knew within a few minutes that I had gone the wrong way," she said. Other mushers told her the reflectors on the sign were bright but hoarfrost overnight had partially obscured the actual directions. "There was nothing he could do except watch the tracker go the wrong way."

With temperatures in the 20s and lower 30s, conditions were not ideal for sled dogs, although they made life easier for the handlers, who often have to hurry up and wait for long periods of time.

By Tuesday night, LaPlante said she was mostly recovered from her adventure, although she still couldn't raise her arms all the way above her head, something she initially attributed to all the ski poling she did on the uphills, before recalling that she'd been dragged out of Finland.

LaPlante is undeterred by her adventures. She is planning to race in Michigan in about a month, and may get one more race in before that.

She said it's a team effort with her husband, the dogs, her and everyone at the kennel.

"I'm just really grateful to my husband," she said. "He's the guy stuck at the checkpoint watching the tracking and telling me I did good no matter how I did." 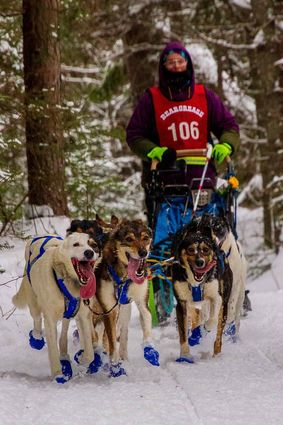 Esko's Alex LaPlante had tough luck in this year's Beargrease sled dog race, taking a spill and a wrong turn.

As for Dave Little and the 40-mile race, the Pine Knot News couldn't track him down before the press deadline. But the Beargrease website says the 53-year-old had been a handler for his friend Drew Heskins a few times. David grew up in Cloquet and has lived in Wrenshall for the past 25 years. He took seventh place with a time of 4:06:11, going an average speed of 8.5 mph.

"Once you've been a part of this wonderful race, you can't help but think about mushing in it," Little said before the race. "This year, I have an opportunity to fulfill a dream."

Ryan Redington of Alaska, the 2018 marathon winner, won again Tuesday afternoon. Keith Aili of Ray, Minnesota came in second among 14 teams that started the race from Duluth to Grand Portage. It was the 36th running of the marathon that honors mail carrier John Beargrease, who delivered along the North Shore by dog sled.