Bill Kennedy took over the Cloquet varsity coaching job in 1967. He is shown here in the 1968 school yearbook with captains Seppo "Andy" Sormunen and Bob Ames. Kennedy, who died Sunday, led the Lumberjacks to their first state tournament appearance in 1982 He retired crom coaching in 1987.

Word began to filter out early Monday morning that the godfather of Cloquet hockey, former boys hockey coach Bill Kennedy, had passed away Sunday at the age of 85 at his home in Mahtowa. The tough-as-nails Kennedy coached the Lumberjacks from 1967 to 1987 after taking over for Don Bourdeau. Kennedy was instrumental in putting the program on the map.

He was also a favorite teacher to thousands of students who met up with him in his classroom during his four decades of teaching.

Bruce Plante, who played for Cloquet and then was a longtime Bantam coach there before moving on to become the head coach of the Hermantown program, spent a ton of time learning the coaching game from Kennedy.

"Bill was a disciplinarian to the highest degree," Plante said. "He did some things at times that weren't right, but they were always with the good intention for the betterment of the team and the individual. He wanted our Cloquet kids to be tough and fearless."

Not only did Kennedy coach a hockey team, he also had foresight. When he arrived, the team played their home games - and practiced - at the hockey rink outside Washington Elementary School. In the late 1960s, voters turned down a referendum to build a new indoor hockey rink next to the high school.

The denial set off a chain reaction from Kennedy that reverberated throughout the hockey community and the town. A group of hockey backers, along with Kennedy, got together to discuss the situation. It was Kennedy who sparked things.

"Bill was the No. 1 driving force behind getting the Pine Valley Ice Arena started," Plante said. "When we lost the referendum, Bill stood up and slammed his fist on the table and said we will build the damn thing ourselves. We all cheered and agreed. Bill followed through the next day and talked to some big hitters in town and they hatched a plan to get it done."

The building opened in 1970 and drastically increased the time players could spend practicing on the ice. The program began to grow in talent under Kennedy's direction with the help of longtime assistant coaches Dick Bartholdi and Dan Stanaway. The trio had myriad talents that complemented each other's and all had a passion for the game and a tireless work ethic.

The work paid off in 1982 with the school's first trip to the Minnesota State High School Hockey Tournament. The Lumberjacks won the consolation championship in the one-class tournament despite losing star center Cory Millen to a broken ankle in the sectional semifinal in St. Cloud. Even with the loss of Millen, the Lumberjacks dispatched Coon Rapids in the section championship as they featured a number of prospects who went on to represent Cloquet in the college ranks.

"As a kid growing up in Cloquet, Bill was the face of the hockey program," Millen said after hearing of his death this week. "He always demanded discipline and hard work from his teams. That made Cloquet one of the premier programs in northern Minnesota. I personally feel Bill contributed a lot to my career and for that I will always be grateful."

Millen went on to become the third-leading scorer in Minnesota Gophers history and then had a stellar career in the NHL.

Long time WKLK radio announcer Steve Jezierski did play-by-play of the 'Jacks' games during the Kennedy tenure and he spent many a night interviewing Bill before games.

"I was always impressed with how much admiration Bill had for the Cloquet athletes," Jezierski said. "He always said that no one worked harder and was more committed than the Cloquet kids ... The teams resembled his personality as tough, hard-working and committed to his values."

Kennedy was a no-frills guy who challenged his players in sports and in the classroom. He wanted to get the most out of everyone around him.

"I modeled my coaching style and philosophy after his aggressive, hard-working, 'no excuses,' 'team first' and caring attitude," Plante said. "Bill was very demanding of all of us, whether we were working on the Barn, in his class at school, playing on any of his teams, or as a friend. All of us young guys owe him so much for making us all better people. I loved Bill Kennedy."

In 2009 Kennedy was inducted into the Minnesota High School Hockey Coaches Association Hall of Fame.

"Building a respectable program with the help of some rough, tough kids who loved to play is what I'm most proud of," Kennedy told the Duluth News Tribune at the time.

He was nominated for the hall of fame by another former player, Dave Esse, who went on to become the head coach of the 'Jacks for many years and is now assisting his daughter Courtney Olin coach the Cloquet-Esko-Carlton girls hockey team.

"I nominated Coach for the ... hall of fame because he surpassed all of the criteria to be selected by his peers," Esse said. "He helped build a rink, develop a high school program, and shape young athletes into young men. Bill taught me and many others life lessons that we carry on to this day. He showed us tough love and was honest about everything he did and said."

"Every time I stand during our national anthem, I don't move," Esse said. "Coach taught us to think of our freedoms because of our past and current soldiers. 'Respect them by not moving,' he would always say ... People in the hockey world respect and identify with our program because of the Lumberjack logo and our work ethic which he helped start."

In true Bill Kennedy fashion, his obituary was written in his own words and was short and to the point. Kennedy explained how he served the country as a Marine and how he attended college at the University of Minnesota, St. Cloud State and the University of Wisconsin-Superior. He mentioned his mother, his wife, his children and his grandchildren. He talked about his sawmill and his meeting a lot of good people in his lifetime.

Kennedy wrote that he had a good life for 64 years with his wife, Barb. It reads almost as an aside when he notes: "I was a fan of high school and college football and hockey."

He requested no funeral service. He asked that any memorial contributions be made to the Democratic Party. He ended with the Marine motto, "Semper Fi."

During his tenure, Kennedy's teams finished with a record of 295-172. He taught social studies and economics for 30 years at the high school. He also coached football and track. He retired in 1991 and set up a sawmill in Mahtowa. 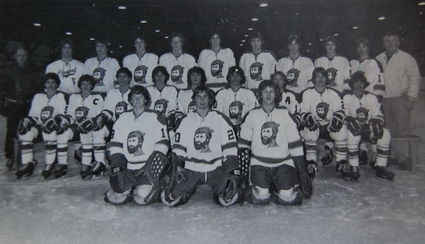 Kurt Peterson, a 1985 graduate of CHS, wrote: "I still draw on the lessons I learned from Bill Kennedy. I wasn't an athlete, I had long hair. I was what he would have called a 'tree frog.' But for some reason he took a liking to me and ... he showed me - in that gritty, common-sense and humorous way of his - that I had more going for me than I imagined."

Pine Knot sports writer Dwight Cadwell, who played for Kennedy in the 1970s, wrote a story on the Northland Sports Online blog in 2014 about his "no nonsense, tough guy" coach. "You either played with fearless toughness and unmatched passion or you found yourself sitting on the bench," Cadwell wrote.

Kennedy was among those coaches who burn an image in fans' minds by the way he dressed. He always wore only a light jacket on the bench and chopper mittens.