Cromwell-Wright gets by pesky Esko 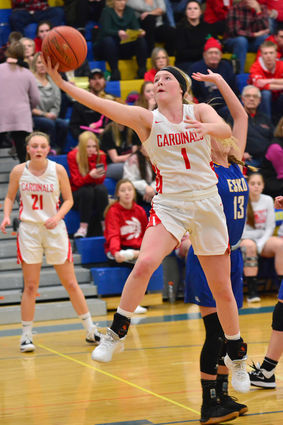 Cromwell-Wright's Taya Hakamaki sails past the Esko defense on the way to the net during Thursday's rare win in Esko.

Cromwell-Wright's 56-48 win last Thursday night over the Eskomos, on the road, was chock- full of accomplishments for the Cardinals.

Second: A victory on the road over Esko for the first time in more than two decades.

Third: Handing Esko its first conference loss at home in more than 10 years.

"It was a big win for us," said Cardinals head coach Jeff Gronner following the game. "Playing and winning at Esko is never easy."

Ranked No. 2 in Class A according to Minnesota Basketball News, Cromwell-Wright (15-2) cruised into halftime with a 10-point lead of 27-17, but the Eskomos rallied back to tie it at 33-33 in the second half only to see the Cards widen the gap again. Later on, Esko (10-7) had the score within 44-42, but the Cardinals used a 12-6 run down the stretch to capture the win.

"I thought we rushed a couple possessions in the first half and had only a handful of free throws, but we slowed things down and improved the free throws in the second half," recalled Esko head coach Scott Antonutti.

Coming into the contest, Antonutti knew what the game plan was against the opponent: "Slow down those two (Taya and Shaily) Hakamakis and hope the others miss." 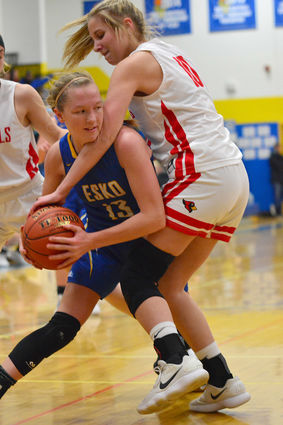 Cardinals senior guard Taya Hakamaki ran into some early foul trouble, but eventually rebounded to score 17 points on the night. But the evening belonged to her also-senior-guard cousin, Shaily, who dropped in a game-tying high of 21 points. Five other players were in single-digit scoring for the Cards.

"I thought we didn't play our best game by any means, but in the last four minutes we made the plays we needed to win the game tonight," Gronner said.

The Cardinals are in a stretch of their schedule against some of the top teams in the area, including games against Hermantown, Esko, Mesabi East, Proctor, MIB and Duluth Marshall.

Concluded Antonutti on the Cardinals: "That team we played tonight can play with anybody, regardless of section or class."