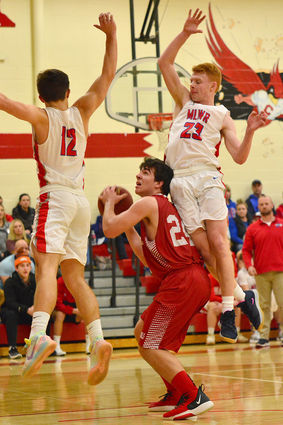 Cromwell-Wright's Gage Zoeller waits for Mason Olson (12) and Carter Johnson of Moose Lake/Willow River to clear out of the way before going up for a shot during Friday's game in Cromwell. A swarming defense and quick offense gave the Rebels a 88-55 win.

Depth and tough defense proved to be a perfect formula for the Moose Lake/Willow River boys basketball team on Friday night as they posted an impressive 88-55 win over a very good Cromwell-Wright team.

"It was really all about Moose Lake/Willow River," said Cardinals coach Bill Pocernich. "I didn't think we played poorly - they were going to beat a lot of teams by that margin the way they played. They are a very good, athletic, deep team that played very well."

The win gave the Rebels an impressive 14-3 record. Cromwell-Wright fell to 12-2 after suffering only their second defeat of the season.

The Rebels raced out to a 44-31 halftime lead as they focused on curtailing Cards high-scorer Micah Pocernich.

"Holding Micah in check was our No. 1 priority," said Rebels coach Wes Cummins. "We knew if we could hold him to under 20 points, we would have a good chance at winning the game. That sounds easy enough in theory, but it's a lot harder in practice. He's a heck of a player. Most scorers in our area are somewhat one-dimensional, but his ability to shoot outside and his ability to get to the basket are just as good."

Pocernich scored 18 points for the Cards, who also got 22 points from Gage Zoeller, but it was not nearly enough to offset the impressive depth of the Rebels.

"Mason is a special player," Cummins said. "He is definitely the best offensive player I've ever coached. Most people note his ability to shoot the ball, and for good reason. He is on track to break the school record for 3-point field goals. He's also a career 40 percent shooter, which is really impressive considering how much he has shot during his career. Aside from shooting, he also has a knack for getting to the basket. Since last year he has worked really hard in the weight room to add muscle. I'm glad he's on my team."

Also scoring for the Rebels were Duane Broughton with four points, Sam Dewey with three and Carter Johnson and Alex Watrin with two each.

"Our depth is our greatest strength and it is tied into every part of our philosophy," explained Coach Cummins. "We like to play fast and push the pace off of every make or miss. This is tough to do if you don't have depth. We also like to pressure the ball and be disruptive."

The Rebels hit 11 3-point shots in the game, which came off myriad screens, as well as attacking the basket.

"They simply spread the floor and attacked the paint off the dribble," Coach Pocernich said. "Athletically we had some difficulty keeping them in front of us. When we played a step off, or gave some help, they rotated the ball and hit the 3-pointer. It was just one of those nights. We couldn't guard them off the dribble and they shot it extremely well, so we could give much help." 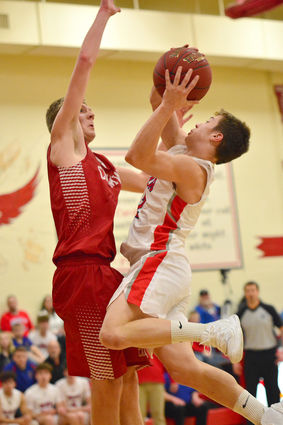 While the Cards struggled to help each other on defense, the Rebels spent their defensive efforts on slowing down Pocernich, the area's top scorer and son of the head coach.

"We first put our best defender, Brady Watrin, on him," Cummins said. "I was excited for this match up, because Brady has great length and tenacity that can really frustrate offensive players. We also tried to limit his touches, but once he got the ball, we brought over another defender to force the ball out of his hands. We did all that and he still nearly had 20 points. He's a special player."

Zoeller did his part to pick up the scoring slack for the Cards, but it was just not enough on a night when the Rebels were filling up the basket with 3-point shots.

Joining Zoeller and Pocernich on the score sheet for the Cards were Taye Anderson with five points, Ethan Shelton and Garrett Zoeller with three each and both Nathan Eliason and Noah Foster with two.