A banner day at the science fair 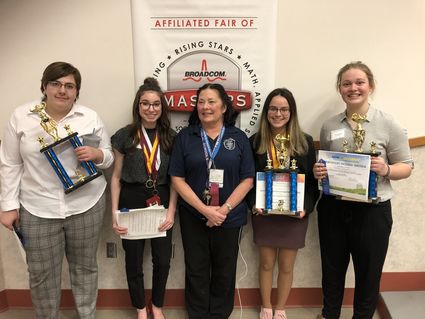 A total of 115 different judges listened and questioned the student presenters, then scored, ranked and awarded whatever categories they were judging.

The student projects run the gamut from everyday to extraordinary, and in many cases reflect a student's fears, fun and fascinations. Such as these actual projects:

• Using Kevlar to increase a school's safety in an active shooting;

• What effect do artificial sweeteners have on the normal flora of the small intestine?

• How does blue light affect your sleep?

• How do video games affect your health?

Cloquet freshman Zachary Line looked at the effect of breathing techniques on overall health, examining heart rate, stress and irritation levels. It was a project that interested him because his mother started having trouble with her heart and because he considers himself a hypochondriac, so he wanted to know what he could do for better heart health.

Regine Frederick really dug into her project, getting "the dirt on dirt," by comparing the dirt in her own backyard to store-bought dirt. What the Duluth seventh-grader found, she said, was there wasn't much difference between the two.

Cloquet freshman Aili Buytaert found that ingesting too much artificial sweetener can change gut bacteria, making them able to metabolize only the sweetener, and unable to metabolize sugar anymore, which would contribute to obesity.

On the subject of digestion (by mealworms, this time), fellow freshman Rowan Rock evaluated the mealworm's ability to biodegrade polystyrene plastic. What she'd like to figure out is how to use that gut bacteria to help waste treatment plants get rid of microplastics in the water.

Ferriere, wrapping up a multi-year wolf project using the same ArcGIS mapping tools, compared wolf packs and "dispersing," or lone wolves, to see how each was affected by age, sex, human and natural disturbances.

"I love all of it, but what I gain the most is the students' presence in my life, today, and into the future," Welsh said. "Right now I get to share the passion they have for their project, but in the future we become colleagues and collaborators that often continue to work together to help kids."

Some of those previous students still come back each year, like Preston and Anna Jackson - who married last August, Welsh's one science fair romance - or Bill Bauer and Christian Wood, who presented their own Utopian Slingshot Creativity in Technology Award.

"In addition to the use of technology, we try to look for up-and-coming-type projects and presenters," explained Bauer. "We look for projects that might be a little rough around the edges, but have a presenter who's so enthusiastic that they're bound to come back if they receive a little encouragement. Our prize - typically a large box of full-size candy bars - is meant to perpetuate that sense of whimsy and excitement for doing science. Everyone loves to win money, sure, but no one forgets the time they won a bunch of candy for their project."

As students get older and gain experience, many of them build on the knowledge gained from past projects.

One of this year's big winners, Cloquet freshman Emily Sapyta, did exactly that.

Welsh explained that last year Sapyta looked at different water (from Lake Superior and the St. Louis River) and the effect of motor oil on duckweed.

Long story short, Sapyta found that tannis may have reduced the oil's adherence to the fronds and decided to look into that for this year's project, with assistance and resources from the microbiology lab at the University of Minnesota Duluth and an associate professor there.

It's not unusual for students to work with UMD professors, or Sea Grant researchers or other professionals in the local and regional science world. Welsh's web of contacts extends far and wide after a couple of decades of mentoring students.

After presentations in the morning and lunch - a time when the judges got really busy calculating - Saturday's regional science fair culminated in a nearly two-hour awards ceremony. There were dozens of special awards from various scientific groups and organizations along with local businesses.

Then emcee Scott Welsh announced the first-, second- and third-place winners in each category: first- and second-place winners advance to the state competition. 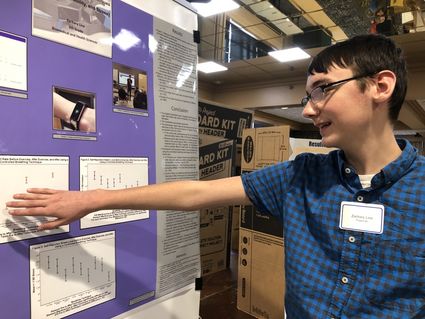 The excitement grew among science fair veterans as the ceremony continued, because the biggest awards - which come with trips to much larger competitions - are announced at the end.

Included in those were:

• Genius Olympiad in New York. Emily Sapyta and Rowan Rock will compete with 1,600 students from 76 countries in June.

• Regeneron International Science and Engineering Fair in Californai, where 1,700 students from 80 countries compete for more than $5 million in prizes and scholarships in California in May. Cloquet students selected as finalists include senior Abigail Smith, Sapyta and Ferriere. Rock was selected as an alternate.