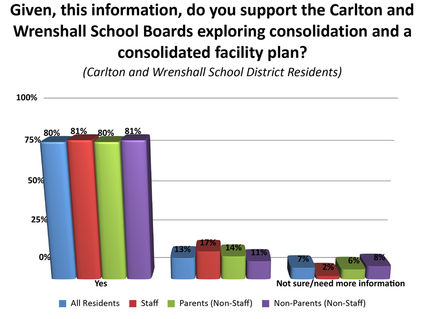 This portion of the survey shows how respondents feel about consolidation.

The results are in and an overwhelming number of people who filled out a recent survey support the Carlton and Wrenshall school districts creating a consolidated district. Across the board, in age categories and among those who have children in the district and those who don't, 80 percent of respondents want consolidation.

The results were released Tuesday night at a special meeting of the school boards with a representative from School Perceptions, a company that has performed more than 10,000 surveys for schools looking to gauge community support for school improvements.

More than 33 percent of the surveys came back - 1,121 - a number that the company performing the survey calls "beyond impressive." And not only do the respondents want consolidation, more than 50 percent of them support the costs associated with it, about $38 million to shore up the South Terrace school in Carlton and the school in Wrenshall.

The taste for those costs comes with a caveat: funding from the state. School officials will now head down to the legislative session to lobby for about 40 percent of those costs to come through state bonding. If the bonding isn't approved by the legislature, both districts have said there will be no consolidation.

School Perceptions says the results shown in the Carlton/Wrenshall indicate a high likelihood that a referendum in August would pass.

For full details on the survey and what we can expect to come next, see this week's Pine Knot News.