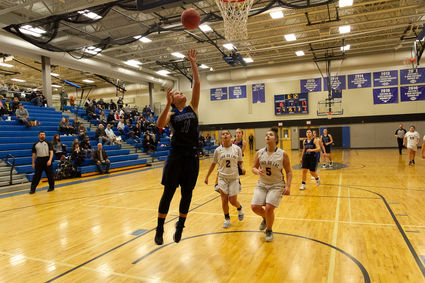 South Ridge and Fond du Lac Ojibwe met Monday night in Culver in a boys and girls doubleheader and each school came away with a win. The Panthers defeated FDL 62-45 in the girls contest, but the Ogichidaa came back and won the boys game 77-63.

Adella Olesiak scored 30 points, including six three pointers, as the Panthers picked up the section win, while Tannia Misquadace finished with 22 points and connected on five long-range bombs in the loss for the Ogichidaa.

The Panthers - who had dropped two straight contests heading into the game Monday - were in need of a win to keep pace in the Section 7A standings.

"We dropped a couple games where if we played well we could have won" South Ridge coach Brad Olesiak said. "We came out, hit some shots right away and didn't turn the ball over like we did against ML/WR, which was to our benefit not having to play from behind."

The Panthers jumped out to a seven point 28-21 lead at halftime. Solid defense and timely shooting led to the 16-point win.

"They have some great shooters on their team," Olesiak said. "Misquadace and Solia Mohr hit some big three-pointers that kept the game close."

Mohr followed Misquadace with 16 points in the loss for FDL. Also scoring for the Ogichidaa were Allison Cooley with five and Talayah Martineau with three points.

Rounding out the scoring for the Panthers were Paris Fierkelepp and Svea Snickers with eight points each, Lexi Bergum with six, five for Alana Young, three for Rylee Young and Raina Schneider scored two.

With the win, South Ridge improves to 12-8 and continues to be in the section standings race to host an opening round game. Panthers hosted Esko Thursday night in Culver after this issue of the Pine Knot News went to press.

FDL is still looking for its first win and fell to 0-10. They will not be in action again until Feb. 20 hosting Little Fork-Big Falls.

After the girls came away with the win, the Panthers boys team was hoping to do the same Monday night. Instead, it was Jordan Brown who led a second half comeback, as the Ogichidaa came back from a halftime deficit to pick up the 11-point 77-66 victory.

"It was a physical game and we tried to push the tempo. There were so many lead changes, I think we just wore them down some in the second half," Ogichidaa head coach Earl Otis said. "We have a lot of talent and when we get going, we are a tough team to beat. When we don't beat ourselves, we can play with any team in the section."

Barney hit his 1,000th point in his career during Tuesday's game against Northome/Kelliher, when he scored 28 points.

"[That is] quite an accomplishment for an underclassmen," Otis said. "He's a great kid and a great player. He was very important to us, especially in what is five victories in a row."

South Ridge held a 29-28 lead at the break. Then hot shooting from the freshman Brown paced FDL as the Ogichidaa scored 49 points in the second half en route to the win. Also scoring for FDL were Ken Fox (8 points), Simon Laprarie (7), Jalen Paulson (6) and Devin Porter (1).

"The second half was more up and down the floor," Otis said. "We limited our mistakes and took advantage when we had the opportunity. I was very pleased with our guys tonight, so many of our younger kids really stepping up and playing like seniors out there." 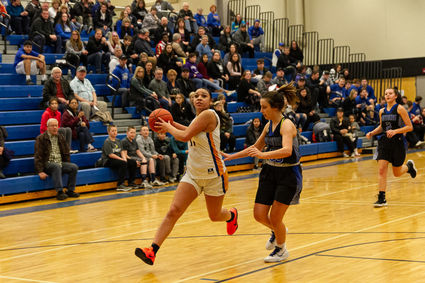 Fond du Lac Ojibwe forward Tannia Misquadace comes in for a lay-up. She finished with 22 points in a loss to South Ridge.

The win moved FDL closer to the .500 mark on the season with a 7-9 record overall and a 6-4 record in section play. FDL will face Minneapolis Roosevelt on Saturday in the Twin Cities.

The loss for South Ridge was their second straight and drops them to 9-9 on the season and 8-4 in section play.

The Panthers, who are looking to secure a first round home game in the section tournament, have a tough road ahead with games against MIB, Ely, Esko, Cromwell-Wright and International Falls down the stretch.