The ticker: A quick look at area teams in action 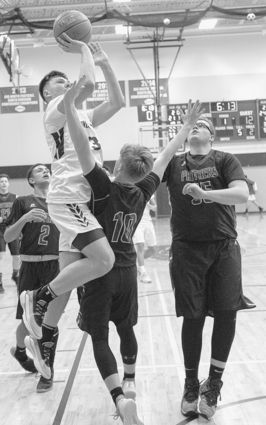 Alexa Snesrud and Maddie Young led Cloquet with 16 and 13 points respectively, but it was not enough to overcome the scoring depth of the Oredockers. Also scoring for the 'Jacks were Kiley Issendorf with six points, Gracie Meagher five, Katie Turner four, Justice Paro three and Cristina Genita with two points.

The Rebels were the model of consistency in the win on Thursday as they led by four points at halftime and then outscored the Panthers by four in the second half to take the eight-point victory. Natalie Mikrot and Ella Rhoades led the Rebels with 24 and 17 points respectively. Alivia Mallory added nine points, Maci Kukuk seven, Monica Mikrot six while both Carmen Hoffman and Kelli Grandquist scored two points. Adelia Olesiak led the Panthers with 17. Both Paris Fierkelepp and Alana Young were in double-digits with 12 points each. Also scoring for the Panthers were Svea Snickers with eight and Rylee Young with five.

Despite scoring the first goal of the game, the Lumberjacks fell in Hermantown. Christian Galatz scored the lone goal of the game for CEC at 5:20 of the first period, but the Hawks answered less than five minutes later when Blake Biondi scored making it 1-1 after the opening period. Jacob Walsh made 45 saves in the CEC net on 48 shots.

Jordan Fjosne scored three goals and added an assist as the Rebels easily handled Grantsburg. Also scoring for the Rebels were Adam Olson, Paxton Vogel and Henry Ribich. Henry Dammer picked up the win in goal by making 19 saves and preserving the shutout.

Taylor Nelson picked up the hat trick and both Dea DeLeon and Kiana Bender added two assists each for the 'Jacks who outshot Bemidji 58-17. Araya Kiminski made 16 saves for CEC.

Trailing 3-2 entering the final period, the Rebels got goals on the power play from Gabby Gamst at 6:06 and Gracie Hartl at 9:15 to pick up the victory. Jamie Benzie and Sandra Ribich also scored for the Rebels. Jo Wekseth made 38 saves on 41 shots for MLA.

Conner Barney and Jordan Brown were nearly unstoppable in the Ogichidaa's victory over the Tigers. Barney recorded 43 points and Brown added 38 in the convincing win. Jalen Paulson was also in double figures with 12 points, Ken Fox added seven and Simon LaPrairie had two.

All four players who scored for Esko were in double figures against the Bombers. James LeGarde's 34-point night led all scorers, Payton Wefel finished with 20, Eli Blue with 14 and Riley Fischer with 11. Leading the Bombers were Blaze Hurst with 23 points, Joe Peterson with 17 and Willie Richardson with 10. Reed Kornovich added five for Barnum, Max Mooers two and Braiden Davis had one.

Micah Pocernich led the Cards with 25 points while both Gage Zoeller and Taye Anderson added 13 points. Garrett Zoeller and Noah Foster both finished with six, while Tate Blomquist and Ben Hansen each finished with three. Both Ethan Shelton and Nathan Eliason had two points and Zevvus Smith scored one.

Brady Watrin had a big game with 32 points to lead the Rebels, but he wasn't the only big scorer for ML/WR as Mason Olson added 19 and Michael Olson finished with 17 points respectively. Duane Broughton scored eight, Landin Kurhajetz seven, Sam Dewey three while both Ben Dewey and Carter Johnson scored two. Leading the Panthers in scoring was Ben Wood with 20, Mason Lane with 12 and Austin Josephson with 10. Jaxson Bennett scored seven, Nick Larson six. Tristan Johnson and Weston Stroschein had three points each and Kayden Palmi scored two.

The Wrens struggled to defend the Mariner duo of Mason Ollman and Riley Tiboni, who combined for 57 of Silver Bay's points on the night. Randy Wimmer led the Wrens with a 23-point effort, Austin Larva added 13 and both Mason Perry and Hunter Holmes tallied 11 points. Rounding out the Wrens scoring were Zeke Rousseau with seven, Isaiah Johnson with three and Tim Swenson with two.

The Lumberjacks were within eight at halftime, but the Rangers pulled away for the 17-point win by outscoring Cloquet by nine in the second half behind a 23-point effort from Lily Peterson. Justice Paro led Cloquet with 12 points and both Caley Kruse and Alexa Snesrud finished with 10.

Garrett Worth, the former Duluth East player, scored two goals to lead the Wilderness to the win.

Brayden Tyman, Christian Galatz and Darian Durand all scored for CEC, but Holy Family got the overtime goal almost eight minutes into the extra session to take the win. Owen Carlson made 36 saves while the Jacks put 30 shots on the Holy Family net.

The 'Jacks picked up their fourth win in a row and their 22nd win of the season as Taylor Nelson scored twice and for 39 goals on the season. Kiana Bender also tallied two goals in the win. Jaxie Pogorelc and Ashtyn Schneberger also scored for the Lumberjacks who wrapped up their regular season with a 22-3 record and the No. 1 seed in the Section 7A tournament.

Bram Scheerer and Aaron Meyers scored for the Wilderness, who fell in overtime on the road as they split the two-game weekend series with the Steel.

The Bulldogs fell behind by five at halftime and were unable to overcome that deficit despite getting 19 points from Elizabeth Hey and 15 points from Alaina Bennett. Also scoring for Carlton were; Kaylee Asleson and Abby Mickle with nine each, Sam Matareli added seven and Bella Anderson finished with a pair of points.

Kristy DeMuth poured in 29 points and Sarah Wagemaker finished with 15 points for the Eskomos, but it was not enough to overcome the Thunderhawks, who led by three points at halftime and pulled away for the win. Jayden Karppinen tallied seven and Brenna Stark had two points for the Eskomos.

Trailing by two points at halftime, the Cards were able to rally back for the win against the Rails. Proctor entered the game with just one loss and the Cardinals had only two losses going into the match up in Cromwell. Taya Hakamaki led Cromwell-Wright with 32 and Shaily Hakamaki added 13 points. Also scoring for the Cards were Andrea Pocernich with eight points, Natalee Hakamaki with five and Emmalee Hoover with three.

The Agates doubled up the score by halftime over the Wrens and won the game going away despite a 14-point effort by Samantha Nyberg and 11 points from Janae Sjodin for Wrenshall. Also scoring for the Wrens were Hannah Lattu with four, Ashley Hart with three, Frenchie Klimek and Alexis Perry with two each and Taylor Bryce with one.

Micah Pocernich and Gage Zoeller both had huge nights with 35 and 26 points respectively to lead the Cards to the win. Garrett Zoeller and Ethan Shelton also were in double figure scoring with 11 and 10 points each.

Mason Olson stayed hot with 29 points for the Rebels and Phillip Sheetz added 22 points to aid the Rebels cause. Also scoring for the Rebels were Brady Watrin with 13 points, Ben Dewey with six and Duane Broughton with four. Sam Dewey, Drew Danielson and Alex Watrin each had two points while both Carter Johnson and Landin Kurhajetz scored one.

Despite outscoring Rush City by five points in the second half, the Bombers were unable to overcome an 11-point halftime deficit. Joe Peterson's 28 points and Blaze Hurst's 21 points led Barnum. Also scoring for the Bombers were Jake Hultgren with six, Reed Kornovich with five and Garrett Coughlin with two.

Alivia Mallory led the Rebels to the win with a 24-point effort in a tightly contested and rugged basketball game played at Carlton. The Bulldogs Alaina Bennett did her best to offset Mallory by scoring a game-high 30 points, but the Rebels had just enough depth in scoring to sneak out the win. Also scoring for the Rebels were Maci Kukuk with 13 points, Natalie Mikrot had 12, and 11 for Skyla Thompson, while Monica Mikrot finished with 10 points, Emily Bohnsack eight and Sarah Christy added four. Also scoring for Carlton were Kayle Asleson and Abby Mickle with 16 points each, Bella Anderson with six, and Elizabeth Hey and Sam Matareli with four each.

The Bluejackets prevailed in triple overtime when McKenna Folstad slipped a wrist shot past Rebel goalie Jo Wekseth, who made 53 saves for Moose Lake Area. Trailing 1-0 into the second period, Raechel Painovich scored on an assist from Jamie Benzie to tie the game for the Rebels at 3:31, but the Bluejackets notched a goal less than two minutes later to regain a 2-1 lead entering the third period. Sandra Ribich tied the game, with Gabby Gamst and Hallie Klavu picking up the assists at the 8:25 mark of the third period, sending the game into overtime.

The sports ticker is compiled by the Pine Knot's Kerry Rodd.