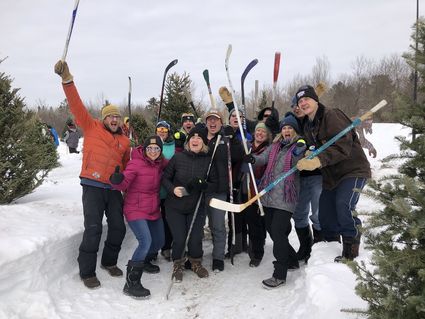 At a balmy 18 degrees Saturday, the weather was perfect for Carlton's annual Winterfest festivities.

Outside the Four Seasons Sports Complex, about 65 people of all ages played a round of Mini Hook and Slice using their own "clubs," which included broken shovel handles, hockey sticks, brooms, actual golf clubs and more.

"Last year I tried a croquet mallet, but that didn't work the best," said Esko's Carol Conway, playing a round with her husband, Roger.

The holes were sponsored by different organizations or businesses that sent a couple dozen volunteers. For the most part, participants tried to hit a tennis ball (provided) into a bucket, sometimes over a ramp or, in once case, through a couple of Sasquatch boards.

"It's cold, but fun," said Cloquet's Mackenzie Bassett, who was working the REACH hole and playing when no one was there. "I didn't know this was a thing."

"In a small town it is fun to see business owners and members of the community come together to put together this event and show support for organizations such as the firemen's bingo," Soukkala said. "It becomes a tradition for families and friends."

A table of judges - most of them Lions Club members - carefully tasted, smelled and graded each entry for appearance, texture, aroma and taste. Winners were Joyce Green for first place, Leola Rodd in second place, and third place for Scott "Fireball" Elwood.

Away from the sports complex, Bethesda Lutheran Church held a Swedish meatball supper all afternoon, and the library offered games and free books. 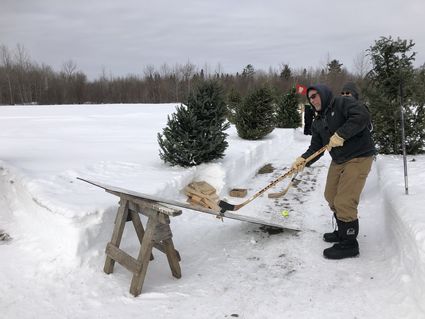 "Winterfest is the perfect opportunity to get out and do some really fun, different things during the cold, long months of our Minnesota winter," Rose said. "It provides a place for the community to come together and really embrace what our area has to offer, and proves there can be fun for everyone all year-round."

The crowds got even bigger as the day wore on.

Rose said her only regret is that even more people don't make their way to Carlton for Winterfest.

"Those that have missed it should plan to attend next year," Soukkala said. "It's not every day a person can explain their minigolf adventures in February in northern Minnesota, in the snow!"