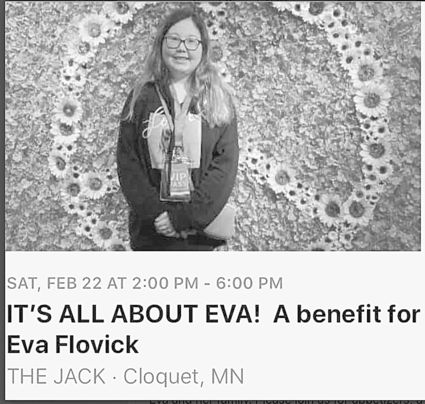 Nearly a year ago, they thought the swelling in her face and ankles was caused by allergies. But the allergy shots didn't help. When her face was so swollen she couldn't open her eyes, the emergency room doctor told them to get a second opinion.

It was following that referral - to an allergy specialist in the Twin Cities area - that 15-year-old Eva Flovick and her family found out she had kidney disease. Things moved quickly, and not in a good direction. By December, only nine months later, Eva's illness had progressed to stage 5: kidney failure.

On Monday the Cloquet High School freshman had both kidneys removed at the University of Minnesota Masonic Children's Hospital in Minneapolis.

Her mother, Katie Johnson, said Eva was feeling better Tuesday after the four-hour surgery the day before. They don't know how long Eva will be in the hospital, hopefully just a week or so, or how often she will have to return for dialysis.

But her mom is hoping Eva won't be without a kidney for long.

On Tuesday, Johnson was having a biopsy done on her own kidney, one of the final steps to getting approval as a donor.

"If there's nothing wrong, then I can be her donor," Johnson said in an interview Sunday, before the family traveled to prepare for Eva's surgery. "I've been doing a lot of testing the last two months. Hopefully we will know next week."

Mom is hoping that she can be the answer to getting her teenager back to good health, and able to enjoy going to concerts - she adores Taylor Swift - and movies, painting, "anything arts and crafts" and just hanging out with friends and family.

Eva tried to start high school like any other freshman, but found she couldn't finish the first quarter. She finished as a homebound student.

"She's been a 4.0 student all year," Johnson said. "The teachers and the school have been wonderful. The high school has been very supportive. Eva probably would have been a lot more stressed about school if it wasn't for how good they are."

Flovick said she wanted to acknowledge the two nurses at the high school and all her teachers with "a special thank you" to her homebound teacher Lance Horvat.

She also thanked friends, family and community members for their love and support.

Eva Flovick was diagnosed with two kidney disorders in March 2019: nephrotic syndrome - a kidney disorder that causes the body to pass too much protein - and focal segmental glomerulosclerosis, a disease in which scar tissue forms on the parts of the kidneys that filter waste from the blood. FSGS can cause nephrotic syndrome, and some of the symptoms include swelling in legs, ankles and around the eyes, weight gain from extra fluid, foamy urine and high fat levels in the blood.

"Instead of the body releasing your urine, when the kidneys aren't doing their job, the fluid stays in your body," Johnson said. "It's not filtering out what it doesn't need. For Eva, it showed in her ankles, face, legs and stomach. She would be out of breath a lot because of the disease and the fluid in her body; sometimes we would bring her in and she would have fluid in her lungs."

At the worst, Eva was retaining so much fluid that she weighed in more than 150 pounds - now she is down to 119, thanks to dialysis.

But dialysis isn't easy either. The process of filtering waste and extra chemicals and fluid from one's blood can take hours. Since December, it has meant going to Minneapolis for treatment three days a week, four hours each time, Johnson said. Eva can't get dialysis in Cloquet or Duluth because she is so young.

"They're great," Johnson said of the children's hospital. "She loves it there."

Even if the kidney transplant goes through, her mom said doctors will have to watch closely in case the scarring of the kidneys comes back. It can be controlled with medicine for some people. She's hoping her daughter will do better with the medicines if doctors catch it sooner. She will also have to take antirejection drugs, even though she and her mother share the same blood type and more.

Her mom said the support following Eva's diagnosis has been amazing.

"Family, friends, community ... people have really been there for her, even some that don't even know her," Johnson said, choking up with emotion for the first time in the interview. "My family has been great. Her friends have been good to her. My friends, everyone's been so great."

Eva's three uncles and four aunts - Katie's siblings Randy, John, Jill, Kevin and their spouses - have been a huge help. And there's Grandma Margie Johnson, who hosted Eva and her brothers every summer when the family was living in North Carolina for a few years.

John and Sara Johnson have owned the popular Family Tradition restaurant in Cloquet for close to 30 years. Randy and Katie work there, and Eva also works there when she can.

"It really is a family tradition for us," Katie said.

Although they have insurance, the out-of-pocket costs and deductibles add up quickly. To help Katie Johnson cover some of those expenses, her family and friends are organizing a fundraiser and Family Tradition meal at The Jack in downtown Cloquet 2-6 p.m. Saturday, Feb. 22. People are invited to eat, donate auction items, buy auction or bake sale items, and simply come together in support of Flovick and her family (which also includes her big brothers, Hayden, a junior at CHS, and Cole, age 26).

There's also a GoFundMe page. Search for "It's all about Eva" at http://www.gofundme.com to donate.

"This will also help her family continue to be able to be by her side, as they are unable to work while she is receiving medical attention," her aunt Melissa wrote on the page.

Uncle Randy said the community has been great.

"That's one of the nice things about living in a small town," he said, expressing relief Tuesday that the surgery had gone well, and hope that his sister can be a donor.

"Her tests today are the last step," he said.

It's not the first time the Johnson family has been touched by tough times. When Randy was in sixth grade, their dad, a teacher, was paralyzed in a Jeep accident.

They've certainly been there for Eva, who's also been amazing, her mom said, through all the pain and long trips to the Twin Cities area since she was diagnosed, and especially since her kidneys started failing in December. 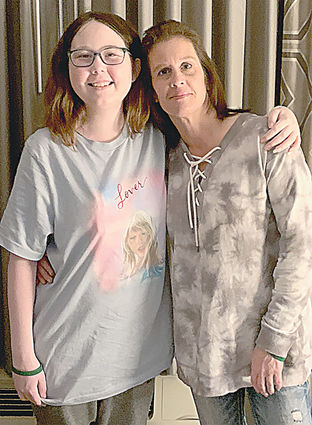 Eva Flovick, left, and her mom, Katie Johnson, pose for a photo the night before Eva's surgery to remove her kidneys. Katie is in the final stages of tests to donate one of her kidneys to her daughter.

Family Tradition and Eva Flovick's aunts and uncles are spearheading a fundraiser for Eva 2-6 p.m. Saturday, Feb. 22 on the main floor of The Jack. They will be serving their signature coneys and chicken salad along with chips and cookies. They ask for a $10 donation for adults or $5 for kids under 12. There will also be a silent auction and raffle as well as a bake sale. To donate an item or certificate for the auction, contact Melissa Johnson at [email protected]

There's also a GoFundMe page. Search for "It's all about Eva" at http://www.gofundme.com to donate.