It's hats on for this art show 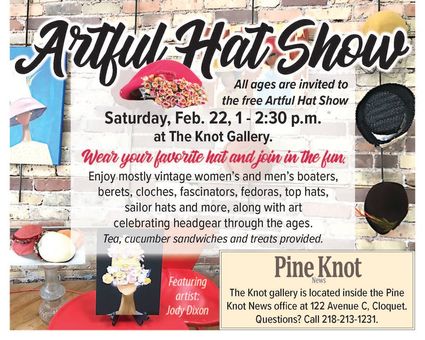 Anyone who would like to come is invited to wear their favorite hat, and come admire other hats and others' hats, drink tea and enjoy treats like mini scones and cucumber sandwiches.

On the long, multicolored brick wall that is the center of The Knot gallery are multiple vintage hats, artworks, old magazine covers and photographs, all centered around hats.

The show was born out of a New Year's Eve encounter between local artist Jody Dixon - who was wearing a flapper dress and a headband suitable for the 1920s at this particular event - and Pine Knot editor Jana Peterson, who was wearing a feather hat.

Oddly enough, although the show features paintings by Dixon and her collection of more than two dozen vintage hats, Dixon isn't actually a hat lover.

She came by her hats at the tender age of 16, when she answered a job ad looking for someone to help care for an elderly woman in East Duluth. They mostly chatted she said, and one time her aged friend started talking about her mother's hats, and proceeded to start digging them out of storage spots and hat boxes all over the house.

"I don't really wear hats, but I liked her stories behind the hats," Dixon said. "She was beaming ear to ear and telling me these stories about her mother and how she passed these hats on to her. I honestly don't remember a lot about the stories, I remember how they made her feel."

She likens that experience with the hats to her art.

Dixon learned to oil paint from a distant Finnish relative, but quickly switched to acrylics because she was impatient, and oils take too long to dry. She paints a variety of subjects: landscapes, flowers, people, and now hats.

"With each painting I have, it's more about how I want to make someone feel, than what's in the painting. How did it make you feel when you look at a painting, or when you remember a story? So I think it's really cool when you pass down something. People are not always going to remember what you say or do, but they're going to remember how you feel, right?" 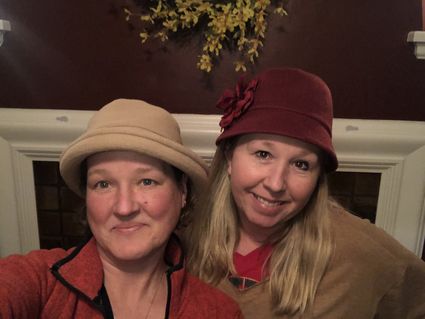 While Dixon provided the majority of the hats for the show, mostly dating from the 1930s, others have also contributed their own millinery offerings, including old military uniform caps, a large red hat from a Red Hat Society member, a bedazzled lime green offering, to a fedora worthy of a 1950s newspaper reporter.

The group effort went beyond hats. Dixon created paintings, Barbie Into painted furniture and Mark Cline photographed a model wearing the hats. The crowning touch will be an audience wearing their own fabulous headgear.

Fittingly, the show comes only two days after Dixon left her longtime job as a director of social services to pursue her painting.

"I'm at that point in my life where I just want to see where it takes me," she said. "And I love the idea of tea and sandwiches and lots of hats. What fun."

The Pine Knot News office is located at 122 Avenue C in West End Cloquet. Admission to the Artful Hat Show is absolutely free.