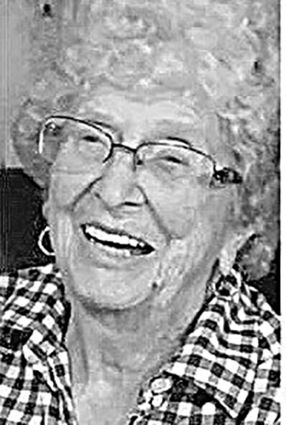 The second of three children, Pat was born May 5, 1930, to Lee and Peg Wedl in Coleraine. She was united in marriage to Bob Bailey on June 30, 1950. They raised their family in Remer. Upon retirement, Pat and Bob moved to St. George, Utah, and she returned to Cloquet in 2008 to be closer to family.

Pat was a kind and loving person who always put others above herself. She enjoyed being with her family, playing bingo, any cards or games, and golfing - even getting a hole in one. Her faith in God and her family were so very important to her.

Pat was preceded in death by her husband, Bob; son John; son-in-law Dick; brother, Lee; and her parents.

The family would like to extend our thanks to the staff at Inter-Faith Care Center for taking such good care of our mom and grandmother.

Visitation: 10:30 a.m. until the 11:30 a.m. Celebration of Life Saturday, May 2 at St. Matthews Lutheran Church, Esko, followed by a gathering until 3 p.m. at her daughter's home in Esko. In lieu of flowers, please donate to the American Heart Association or American Cancer Society. Funeral arrangements by Nelson Funeral Care, Cloquet.