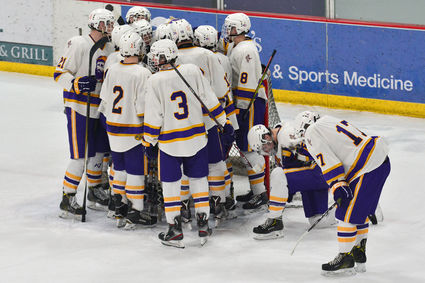 The CEC Lumberjacks gather around their net after being defeated 5-4 in overtime against Elk River Tuesday night in Cloquet in the Section 7AA quarterfinal game.

The Cloquet-Esko-Carlton and Elk River boys hockey teams took fans on a ride of epic proportions in Tuesday night's Section 7AA boys quarterfinal hockey game in Cloquet. After a slow start the Lumberjacks rallied in the second and third periods, only to lose 5-4 in overtime.

The Elks were ready from the get-go as Zach Michaelis, who played prior to the season for the Minnesota Wilderness, scored on a scramble around CEC goalie Jacob Walsh just 32 seconds into the game, making it 1-0. At 9:11 of the first period, Austen Humphrey - who had just been in the penalty box for tripping - sniped a goal past Walsh, pushing the lead to 2-0, and that's how the first ended.

"Elk River came out flying," CEC coach Shea Walters said. "After we gave up the two goals right away, we controlled the pace of the game completely."

CEC came out with a purpose in the second period. Just 17 seconds into the period, Christian Galatz picked up a turnover and slammed home a goal past Elks goalie Josh Koziol to cut the lead to 2-1. The 'Jacks evened the score when Aaron Moore scored after teaming up with Cade Anderson and Hunter Finnila on a pretty tic-tac-toe play on the power play at the 12:15 mark.

Unfortunately for CEC, the Elks responded in kind just 20 seconds later on a Cayden Casey goal to reclaim the lead at 3-2 after two periods.

"We scratched and clawed our way back into the game," Walters said. "You have to give credit to Elk River: they never gave up and they had a pushback."

The ebb and flow of the game became even more intense in the third period. Just 3:39 into the third period, Cole Ketola hammered home a goal for CEC on an assist from Kaden Crane to tie the score at 3-3. Just a little over two minutes later, the Lumberjacks got a huge save from Walsh and then, as the play continued, it was another Ketola goal with Moore and Galatz assisting. That gave CEC its first lead of the game.

"We had several opportunities that could have opened the game up for us," Walters said.

The 'Jacks held that lead throughout the third period until there was 1:37 left. With Koziol pulled for an extra attacker, Humphrey scored to tie and send the game into overtime. The goal was scored during a wild scramble in front of the CEC net when Humphrey was able to find the loose puck and wedge it between Walsh and the pipe.

"Each and every kid did everything they could," Walters said. "In overtime we had multiple opportunities to score, but it just didn't go our way."

By virtue of the tie, the game entered an eight-minute overtime session and the Lumberjacks showed plenty of jump. They had numerous chances to win the game only to either be stonewalled by Koziol or to have a puck blocked by a defender. At one point the 'Jacks stormed the net for more than two minutes before the puck came out of the zone. Finally, it was Michaelis who was able to skate the length of ice as he managed to turn the corner against the CEC defender and muscle a puck past Walsh with just 15 seconds remaining for the game-winning goal.

"Walsh played so well for us, especially as a sophomore. He is a leader on our team and he gave us a chance to win," Walters said. "In the end they had one play and it was on one of their best player's stick. He has that next-level speed and wound it up in the neutral zone. It was obviously a big play for them."

CEC ends the season with a final record of 13-12-1 while the Elks will move on to the semifinals of the sectional tournament with a record of 11-15.