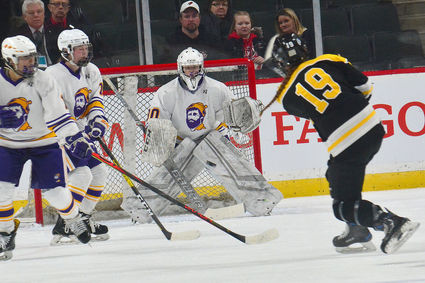 A shot on the Lumberjacks' goal by Hutchinson is blocked by goalie Araya Kiminski as the Lumberjacks win 2-0 in the opening round of the Minnesota State Girls Hockey Tournament at Xcel Energy Center in St. Paul. An early goal and superb goalie play by Kiminski were key to the quarterfinal win.

Since the beginning of the sectional hockey tournament, the CEC girls hockey team has jumped on teams early in the game.

On Wednesday the Lumberjacks opened play at the Minnesota State Girls Hockey Tournament against Hutchinson. And any thoughts that they would have a bad case of the nerves was settled in the first minute-and-a-half of their state quarterfinal match up. That's when Jenna Zdebski fired home a goal to give the 'Jacks the early lead over the Tigers and eventually a 2-0 win.

Another common denominator was the unbelievable goaltending of CEC freshman Araya Kiminski, who shut down the Tiger offense and provided an 18-save shutout effort.

The goal by Zdebski was assisted by Dana Jones and Emily Litchke and it seemed to ignite the Lumberjacks in front of the crowd at the Xcel Energy Center.

Zdebski's goal was not the only goal of the period for CEC. Dana Jones put the 'Jacks up 2-0 after finding a loose puck behind Tiger goalie Hannah Ladwig, who thought the puck was between her pads after a shot by Marina Dostal. Jones, who had circled behind the net, came around and saw the puck lying a few inches behind Ladwig, then dived and tipped the puck into the goal. Getting assists on the goal were Dostal and Jaxie Pogorelc.

After one period, the Lumberjacks held an 8-3 shot advantage over the Tigers.

Things opened up in the second period with the Tigers outshooting CEC 11-8, but neither team was able to score.

The lone penalty of the second period was called on CEC when Dea DeLeon went to the penalty box after being called for a cross-check. 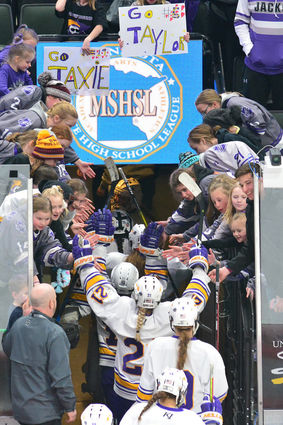 Fans congratulate the Lumberjacks as they leave the ice after defeating Hutchinson Wednesday in the state tournament at the Xcel Energy Center in St. Paul. The team plays today against Warroad.

The biggest play of the period came with just seconds remaining when CEC goalie Kiminski made a huge save on Hutchinson forward Britta Johnson. After a scramble around the 'Jacks' net, Johnson got the puck all alone to the left of the CEC net with a huge opening to shoot at, but Kiminski was able to scramble with her right leg pad to get it on the shot and cover the puck - sending the 'Jacks to the third period up by a pair of goals.

The third period was much the same as the second with both teams getting chances, but both goalies stood tough. With 20.8 seconds remaining, Kiminski stopped Johnson point-blank to preserve the shutout and give CEC the win. For the game, Kiminski made 18 saves while Ladwig saw 26 shots for the Tigers.

The win moves the 'Jacks to the semi-finals on Friday at 11 a.m. against No. 2 ranked Warroad, which also won on Wednesday morning at the Xcel Energy Center in St. Paul. This is the first time the CEC girls hockey team has moved on to a state semifinal game since 2006.