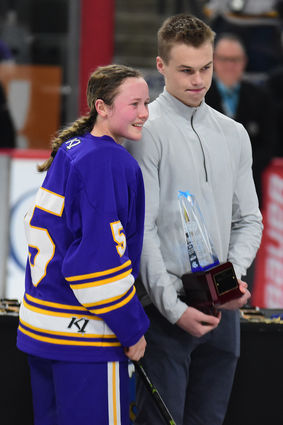 In a season where they set a school record for wins and ended as the runners-up in the Minnesota State Class A Girls Hockey Tournament, the Cloquet-Esko-Carlton Lumberjacks found themselves in rarified air in the awards department.

Following the loss in the championship game, three CEC players were named to the All-Tournament Team, their coach was named Coach of the Year, and one of their players was the Herb Brooks Award winner.

Named to the All-Tournament Team were senior forward and captain Taylor Nelson, sophomore defenseman Tenley Stewart and freshman goalie Araya Kiminski. Nelson scored three goals and had two assists in the Lumberjacks semi final win over Warroad. Stewart was continuously lauded by members of the media for her stellar play on the blue line. Kiminski was nothing short of sensational throughout the tournament and was widely regarded as the best goalie in either Class A or Class AA as she pitched a shutout versus Hutchinson, held a high-scoring Warroad team to three goals and then fought off numerous scoring chances in the title game for Breck.

Following the awards presentation on the ice for the runner-up trophy and medals it was announced that Nelson was also the recipient of the Herb Brooks Award. Brooks was the head coach of the 1980 Olympic team and former head coach the University of Minnesota men's hockey team who died in a car crash in 2003. The award is given each year to the most qualified hockey player in the state tournament who strongly represents the "values, characteristics and traits that defined Herb Brooks." It is one of the most prestigious awards given in high school hockey.

"It means a lot and I could not have done it without my team," Nelson said Sunday. "Every single one of my teammates helped me become the person I am today. I am so grateful for my coaches, teammates, and family. He is a legend and it's an honor to receive an award named after him."

As a team it was announced this week the Lumberjacks won the Section 7 All-Academic Award with a team grade point average of 3.888.

"Winning the All-Academic Award is something our whole program is very proud of," Olin said. 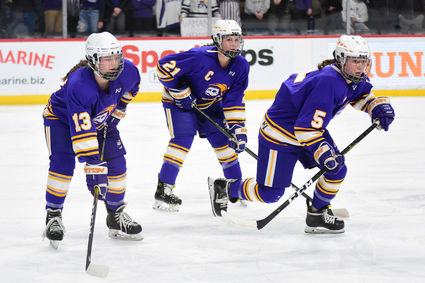 The frosting on the cake for the season came when CEC coach Courtney Olin was named as the Class A Coach of the Year on Saturday night, and her assistant coach, Dave Esse, was named the Class A

Assistant Coach of the Year. Dave is Courtney's father.

"It was an honor to receive the Coach of the Year award, and just be associated with all of the other coaches who were nominated and in that conversation from around the state," Olin said. "I think coach Esse is one of the most knowledgeable coaches, if not the most, in the state so I think he is very deserving. As coaches, we talk all day and night about Xs and Os but if you don't have players who are willing to work hard, buy in, and execute, then coaching means nothing. We are so fortunate to have such a great group of players to work with, who make our job fun every day and a lot easier."