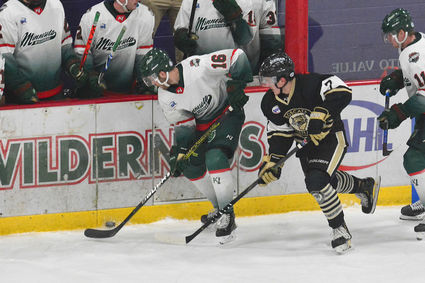 With only 12 games remaining in the regular season schedule, the Minnesota Wilderness are hoping for a last season push to put themselves into the Central Division playoffs and the battle for the Robertson Cup.

The Cloquet-based North American Hockey League team is coming off a weekend split with Bismarck, along with a road victory over St. Cloud on Thursday night. The Wilderness are 2-3 in their last five games. With only four of their last 12 games of the season against divisional opponents, they are hoping to get hot at the right time of the season.

“We play very good hockey every game, but it seems we have a lapse or a lull which costs us,” said head coach Jon Vaillancourt. “We try to break the periods down to periods within each period and win each of those mini periods, but we also have a focus loss and it ends up costing us in the end.”

The Wilderness are fifth in the Central Division standings with 49 overall points, while both Austin and Minot are tied for third with 57 points. Both those teams have one more game left in their respective schedules than the Wilderness, who will be home for the second straight weekend and will face Chippewa Falls in a two-game series.

Bismarck — which is in second place in the Central Division standings — defeated the Wilderness Feb. 21 by a score of 5-2. The Bobcats got off to a fast start, scoring three times in the first period. They added another in the second before Wilderness forward Aaron Meyers scored his seventh goal of the season to cut the lead to 4-1. Lewis Crosby notched his 10th goal of the year just seconds into the third period, but the Wilderness could not close the two-goal margin and Bismarck added an empty-netter for the 5-2 victory.

Saturday night the Wilderness spotted the Bobcats a first-period goal but responded right back in the second, scoring four times to give the Wilderness a 4-1 lead after two periods. Nathan Adrian, Nate Horn, Tyler Watkins, and Christian Galatz — fresh off his Cloquet high school hockey season — scored for the first time for the Wilderness. Galatz, who also played last fall for the Wilderness before the high school season started, had one assist in 12 games. Garrett Worth added an empty net goal in the win for Minnesota.

Before the Bismarck split, on Feb. 20, the Wilderness picked up a much needed win over St. Cloud following a sweep by Aberdeen over the Wilderness in Cloquet.

The Wilderness again came from behind to pick up Thursday’s win. Nate Horn tied the contest in the second period after the Blizzard scored the only goal of the first period. St. Cloud regained the advantage a minute and a half later to take a 2-1 lead.

That lead was short-lived. Esko’s Ryan Nelson tied the game just 33 seconds later for the Wilderness as the second period ended tied 2-2.

Lewis Crosby and Garrett Worth tallied third period goals for the Wilderness to give Minnesota the 4-2 win. 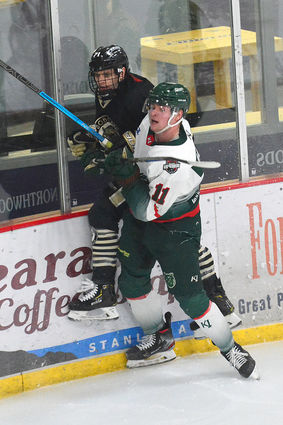 “We got two big wins over the three-game stretch,” Vaillancourt said, “We were hoping to pick up all three, but we know how each and every contest from here on out is. Four teams move into the playoffs and we are on the outside looking in, so we have to be at our best down the stretch.”

Other local players on the Wilderness roster include Esko’s Dane Stoyanoff, Duluth’s Garrett Worth, along with Tyler Watkins, Jacob Herter and Sam High of Hermantown.

The Wilderness will play Chippewa Falls at 7:05 p.m. both Friday and Saturday nights at Northwoods Credit Union Arena in Cloquet. Friday is Washington School Night and the Pine Knot News is the sponsor of Saturday night’s game.